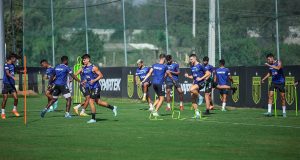 Manolo Marquez’s Hyderabad FC are back in action at the GMC Balayogi Athletic Stadium for the first time this year when they take on Chennaiyin FC in a testing Indian Super League clash this Thursday.

Hyderabad FC last played at home in a 6-1 win over NorthEast United FC in the final game of 2022, while also adding a 3-1 win over FC Goa on the road, to keep the pressure on Mumbai City for the top spot in the league table.

Chennaiyin FC came back from 2-0 down to register a point away against Jamshedpur FC in the last round and will hope to put on a similar performance in this game as well.

Thomas Brdaric’s side have lost just one of their last four games, while not failing to score in any of their last nine league outings. The likes of Petar Sliskovic, Julius Duker, Aakash Sangwan, Vincy Barretto, Edwin Vanspaul and Vafa Hakhamaneshi alongside Anirudh Thapa who returned from injury, have all been in fine form in recent games.

Hyderabad FC Head Coach Manolo Marquez expects a difficult game on Thursday. “Chennaiyin FC are a very strong team and are currently in a position where they have to win to qualify,” said Manolo.

“They are a team that are not afraid to take risks and I like this style. They are a dangerous team who are always improving and we expect a very tough game,” he added.

Hyderabad FC saw Bartholomew Ogbeche find form in the last few games. He now has six goals for the season and will have an eye on the Golden Boot, again. The likes of Javi Siverio, Borja Herrera, Joel Chianese, Mohammad Yasir, Halicharan Narzary, Abdul Rabeeh and Rohit Danu have all been in impressive form in front of goal.

Odei Onaindia, Nim Dorjee Tamang, Nikhil Poojary and Akash Mishra have been superb at the back while Gurmeet Singh has hardly put a foot wrong, and together stand as the best defense in the league this season.

Coach Manolo believes that his side are ready to give it all for the three points in this game. “We want to stick to our style of play but we know that every opponent has a different style. We need to understand how to manage every game and we have to keep going like this for the rest of the season,” said the Spaniard.

Hyderabad FC have faced their South Indian foes twice already this season. The group stage game in the Durand Cup and the reverse fixture in Chennai both ended in 3-1 victories for Manolo’s side while Chennaiyin FC saw a player sent off in both games.

The visitors will miss the services of Abdenasser El Khayati and Rahim Ali, both of who are out injured. Hyderabad FC have Joao Victor and Laxmikant Kattimani still on the sidelines ahead of this tie.

Neither team can afford to drop any points as we approach the business end of the campaign and are expected to put on a show on Thursday, even for the neutral.

The game kicks off at 7:30pm IST on Thursday and will be telecasted live on the Star Sports Network with live streaming on Disney+ Hotstar and JioTV.

Previous Mumbai City FC VIDEO: Check out what a day in the life of Sanjeev Stalin looks like!
Next Doug King confirmed as new majority owner of Coventry City FC!