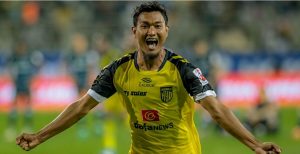 Hyderabad FC value character as much as quality. The club has a group of players that are ready to fight for each other as a team. But even as individuals, we are trained not to give up.

There’s plenty of examples of great attitude on show in the two seasons at Hyderabad FC under Manolo Marquez. And Halicharan Narzary has plenty of it in his locker.

The 29-year-old signed a contract extension with Hyderabad FC and is excited for the start of the new season.

“I am super excited for the upcoming season. I am really happy to be a part of this group and this wonderful club for another season and we are all ready to give it our all, again!” Halicharan Narzary said.

Manolo Marquez loves a workhorse and couldn’t ask for a better winger than Hali. And Hali has a similar feeling about the boss. “Manolo Marquez is a wonderful coach and I always enjoy playing under his guidance,” said the winger.

“I would like to continue learning under him and hopefully we will have an even better season this year,” he added.

It is no surprise that each and every Hyderabad FC faithful rejoiced after the news of the extension. Hali is a crowd puller. The energy on display every time he takes the field keeps fans at the edge of their seat.

Narzary has roamed up and down the country over the years but has now found home in Hyderabad.

The city, the fans, the squad, and the staff – Hali is impressed with everything Hyderabad and describes what makes this club so special.

“Everything at Hyderabad FC is perfect. Every player is friendly and we are all now a family. We are always ready to help each other improve as most players have been together for more than two years now. This helps build a strong bond among the squad that makes Hyderabad FC special,” Halicharan Narzary said.

Being a senior figure in the squad, the 29-year-old has set an example to the youngsters in the last two seasons. He played every game of the 2020-21 ISL campaign, making some crucial contributions right till the final game.

Though injury curtailed Hali’s 2021-22 campaign, he was determined, worked hard in the bio-bubble on his long recovery, and came back to be a hero in the ISL final.

Narzary picked up an injury just eight minutes into the first game of the season and missed over three months of action. He came back late in the campaign, had a few impressive cameos before the all-important kick of the ball at Fatorda.

He showed great composure to slot home the final penalty that won Hyderabad FC the ISL title and these are stories that stimulate and inspire the younger players in the squad.

Hali also revealed that he takes on this responsibility as a senior figure in the squad, with a smile.

“I am always there for the youngsters in the squad. Be it on the field or off it, I try to help each and every member at the club. Not just during games, we as a team look to improve in every training session and I try to do my bit to encourage them, every minute of the day,” Halicharan Narzary said.

Narzary has already lined up at the Gachibowli but at the other dugout. But with fans now back in the stadium, he will experience the Hyderabadi reception when the season resumes.

And he urges the fans to make it to the stadium and make themselves heard. “The last season without fans was really hard. But next season, I hope that we experience all the cheers from the stands. You guys help motivate us every day so make sure you come and support us next season.”