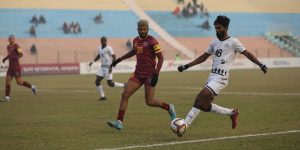 A match that remained as cold as the chilly evening at Ambedkar Stadium for 80 minutes, sprang to life in the last ten to end in a tense 1-1 draw. Mohammedan Sporting’s workhorse captain Marcus Joseph gave his side the lead in the 81st minute with a brilliant left-footer. But his Rajasthan United counterpart Joseba Beitia scored from the spot seven minutes later to equalise.

For the fourth match this season, the Kolkata side failed to hold on to their lead, adding just one point to their kitty. Joseph, however, moved up to joint-third in the list of top-scorers with his fourth goal.