Ignite your passion a step back in time for Bologna FC’s Macron-made third kit!

Press Release 2021-10-04 Italy, Kits Comments Off on Ignite your passion a step back in time for Bologna FC’s Macron-made third kit! 838 Views 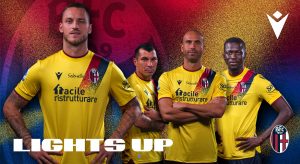 It’s the 1997-1998 season, an important year for the red and blues, characterised by the signing of football legend Roberto Baggio. It is that particular season’s yellow third jersey that the club has chosen to give tribute to with the design of the new third jersey that Sinisa Mihajlovic’s team will wear this season.

Presented by Bologna FC 1909 and Macron, the Hero company and historic technical sponsor of the Club, the jersey symbolically goes back in time but materialistically looks to the future. Yellow in tone, with a green soul.

Like all the other Bologna FC match kits, the new third jersey contains a clear message of sustainability and respect for the environment thanks to the fabric used to make it: Eco-Fabric material, made from recycled plastic and certified according to the most important international standard for the sustainable production of clothing and textiles, the Global Recycled Standard.

The new third jersey has a crew neck with red-blue borders and a detail on the sleeve edges. The internal backneck is customised with the Club’s colours and the words “LO SQUADRONE CHE TREMARE IL MONDO FA”. On the external backneck feature the words “WE ARE ONE”, a motto representing the identity and sense of belonging associated with these colours. The distinguishing feature of this kit is the diagonal red and blue stripe that runs from the left shoulder to the chest. On the right, in blue and silicone print, the Macron Hero; on the left, heart-side, the patch with the Bologna FC 1909 logo.