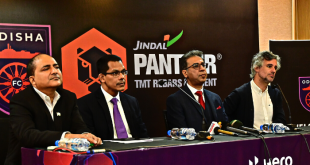 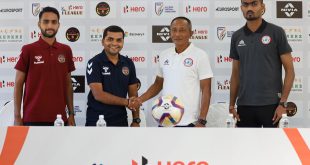 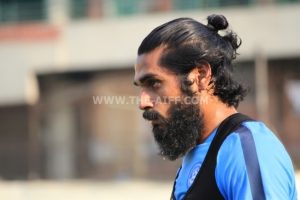 There is this thing with defenders in the ‘Beautiful Game.’ They might look rugged on the field – tackling for the ball, screaming for the Team to maintain shape, giving their blood and sweat to keep the opposition at bay.

But off pitch, it can be one of the most amiable conversations you will ever have.

The tall physique of Sandesh Jhingan, who has been a regular starter and a brick in the wall of the Indian defence line is the epitome of this Jekyll & Hyde nature of defenders when it comes to Indian Football.

When he is not bracing himself to make that sweet-as-a-whistle sliding tackle, Sandesh Jhingan can be found “writing poetry while strumming the guitar.”

“I was always in love with the guitar. However, recently I have started to write my own poems after being inspired by quotes that you see on social media,” he informs AIFF Media.

“Poetry came naturally to me and that along with strumming the Guitar are my hobbies,” he adds.

“Life in off-season for a Footballer is different as the discipline in a Camp breaks, but hobbies help to maintain a balance between both while retaining one’s identity.”

Jhingan’s warrior type image on the field is perhaps hyperbole even more by his lumbersexual suave look — sporting a man bun with heavy beard.

“Last year I had long hairs and I was tying them into the pony — the beard grew overnight and I decided to sport the look. I didn’t realize this was a lumbersexual trend that the World was following until a few months back,” he quips.

Although off-season provides a chance for the Sporting Goa defender to indulge in his hobbies even whilst raking up the gym for “a healthy lifestyle”, Jhingan still keeps a tab on Footballing action around the World.

“It is hard to keep your mind off Football when Football is your passion. Obviously like any other Football fan, I too am keeping a tab on the ongoing Euros.”

When inquired about the Team which he would like to see as the Euro Champions, Jhingan quipped, “Wales! I would love to see Wales as the Champions in this edition of the Euros.”

Fun and Frolic along with the FIFA World Cup Fever has hit the camp! You …