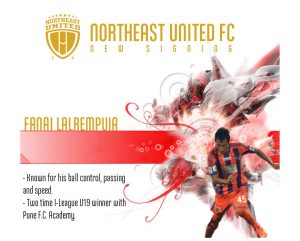 The Lunglei-born 20 year old Lalrempuia Fanai from Mizoram is regarded as one of India’s brightest young midfielders, who according to NEUFC is, “a youngster possessing an abundance of talent and skill, Fanai will bolster the ‪Highlander’s midfield unit even further.”

Lalrempuia was first scouted by the Pune FC Academy from the Subroto Cup schools football tournament. At PFC he was one of their key players winning the Under-20 I-League in 2012 and 2013, also getting his full I-League debut as a 16 year for Pune FC. He thereafter went on to play for the India Under-19s in the 2014 AFC under-19 championship qualifiers.

In the second edition of the ISL 2015, Lalrempuia Fanai was selected by FC Pune City and made three substitute appearances for them and now shifts back to the Northeast to join NorthEast United FC.

Expressing his joy at the latest development, John Abraham, Owner, NEUFC opined, “We are delighted to welcome Fanai Lalrempuia back home. He is undoubtedly a talent and we hope that he uses the platform of NorthEast United FC to exhibit his skills.”

Further commenting on the appointment, Ardeshir Jeejeebhoy, Director of Football, NEUFC said, “Fanai is one of the most technically skilled players in his category. He is a rare breed who has tons of potential in his locker. He is quick, agile, a good passer of the ball and knows how to put in a tackle. We are looking forward to him putting in his utmost dedication because we know that on his day, he can make a difference on the pitch.”