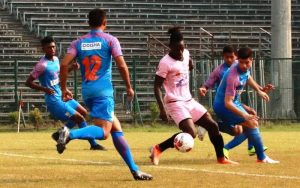 Indian Arrows were held to a draw by Southern Samity in the 123rd IFA Shield opener at the Mohun Bagan Ground in Kolkata on Sunday, December 6.

Sujit Saren had put Southern Samity in the lead against the run of play in the first half, but the Indian Arrows fought back in the second half to level the scores in the end with a Gurkirat Singh cracker.

It was a frantic start to the game as both sides probed and prodded at each other’s defence. Parthib Gogoi created an early chance for the Arrows, sending in a volleyed cross towards Tapan Haldar beyond the far post. The winger brought the ball under control and tried to sell a dummy to create space, but was eventually dispossessed.

Southern Samity had their first real chance on the counter a little ahead of the quarter-hour mark, when a Gurkirat free-kick was punched out and Southern Samity striker Rudy Abblode broke free of the defence with the goal in his sight. But Ricky Shabong put in a precise sliding tackle to regain possession.

Southern Samity managed to get the lead near the half-hour mark, when Sujit Saren slotted it into the Arrows net to put the local side in the lead.

The Indian Arrows piled the pressure on Southern Samity after going behind. Just before the half-time mark, they created two clear-cut chances, which were foiled.

The first of these chances came when Harsh Patre weaved into the opposition box and struck a shot aimed towards the far post, but it was blocked.

The second was perhaps the best chance of the half, as centre-back Sajad Hussain leapt above others to nod a Sailo corner straight at goal. Unfortunately, the header was cleared off the line, as the referee blew his whistle, signalling the end of the first half.

Southern Samity came out with more vigour towards the start of the second half, but Arrows keeper Bukhari marshalled his defence well to hold off the local side.

AIFF’s developmental side, however, slowly began to claw their way back into the game. Parthib Gogoi was played through on goal with about 15 minutes left on the clock, but his shot went inches wide.

Gurkirat Singh made up for that chance as he dribbled his way past two defenders and slotted it past the keeper to level the scores with a little over 10 minutes remaining on the clock.

The lad from Punjab almost snatched the lead as he entered inside the opposition box from right, leaving a defender flat on his backside. However, he soon ran into some traffic, and the chance was nipped.