Press Release 2022-11-27 Indian Super League Comments Off on Jamshedpur FC go down 1-3 to East Bengal FC at the Furnace! 731 Views 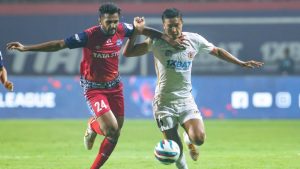 Jamshedpur FC fell to a 1-1 defeat at the hands of East Bengal FC at the JRD Tata Sports Complex on Sunday, November 27.

Amid an injury crisis at Jamshedpur FC, Sheikh Sahil made his debut for the club, slotting into midfield in the absence of Wellington Priori, with Daniel Chima Chukwu making his return to the team in place of Ishan Pandita. In some welcoming news for the team, Laldinliana Renthlei made his return from injury.

It was East Bengal who broke the deadlock first, with VP Suhair finding the back of the net with a diving header in the second minute.

Despite the early setback, Jamshedpur FC kept the pressure on and racked up the chances in front of a raucous home crowd.

Against the run of play, East Bengal found a second goal in the 26th minute, with Cleiton Silva beating the offside trap and making it 2-0 to the side from Kolkata.

It may have been easy for the home side to lose all belief, but the Men of Steel proved their mettle, fighting back and finding a golden opportunity after Harrison Sawyer was brought down in the penalty area.

The referee pointed to the spot, and amidst East Bengal protests, Jay Emmanuel-Thomas kept his cool and gave Jamshedpur a well deserved first goal in the 40th minute.

Jamshedpur FC came out all guns blazing in the second half, with JET enjoying a terrific start to the second period. The former Arsenal academy graduate’s header was saved by goalkeeper Kamaljit Singh.

A lapse in concentration just moments later allowed Cleiton Silva to double his goal tally, as he slotted past TP Rehenesh to make it 3-1 to the away side in the 58th minute.

Despite a valiant effort from the Men of Steel to push for a couple of goals, East Bengal held on to capture a crucial win in their ISL campaign.

Jamshedpur FC will take on Kerala Blasters in their next match at the Furnace on Sunday, December 4 with only victory on their minds.