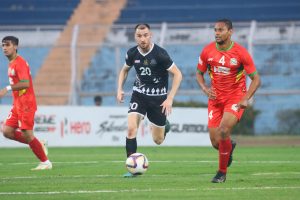 Mohammedan Sporting edged out TRAU FC 1-0 at the Kishore Bharati Krirangan in Kolkata on Sunday, November 27 to pick up their second consecutive win.

Midfielder Faslu Rahman’s first-half strike made all the difference for the Black and White Brigade, who are now starting to find their feet after losing their opening two matches of the season. The fixture marked the much-awaited first appearance of the season for Mohammedan Sporting’s midfield maestro Nikola Stojanović. The Serbian played a key part in the Black and White Brigade’s second-place finish last season.

TRAU, who suffered their first defeat of the season to Sreenidi Deccan last time out, came out all guns blazing and created a couple of early opportunities.

In the 11th minute, full-back Naresh Singh Yendrembam whipped in an inviting cross from the right, which was headed inches wide by youngster Sagolsem Bikash Singh.

After withstanding the visitors’ early pressure, Mohammedan Sporting tried to slow things down and build patiently from the back with the help of two midfield engines in the form of Stojanović and Davronov.

It took half an hour for the hosts’ first real foray into the TRAU penalty area. Faslu Rahman broke free from the right but his intended cutback for Marcus Joseph was intercepted by a red shirt.

The breakthrough for Mohammedan Sporting came in the 40th minute with their first shot on target. Abhishek Ambekar’s looping cross invited TRAU custodian Loitongbam Bishorjit Singh out of his goal but he failed to make the collection. The ball then fell right in the path of Faslu Rahman outside the box, who struck it first time to bag his second goal in as many games.

TRAU had a great chance to equalise at the stroke of half-time as Tursunov launched a powerful low strike with his right foot, which was caught by Sankar Roy’s firm hands between the sticks.

The passionate Mohammedan Sporting fans found their voice in the second half and the sound of drums reverberated around the Kishore Bharati Krirangan.

TRAU had another attempt on target in the 55th minute as a headed clearance from Mohammedan Sporting’s Ousmane N’Diaye fell onto the feet of Gérson, who sent his half volley straight at goalkeeper Roy.

The home side dominated possession for much of the second half, reducing TRAU to try their luck on the counter. One such occasion saw Tursunov thread a forward pass inside the box looking for Naresh, but Roy came out of his goal to collect it.

A huge chance to double their advantage went begging for Mohammedan Sporting in the 70th minute. Winger SK Faiaz found Marcus Joseph with a brilliantly cushioned header just outside the six-yard box but the skipper miscued his effort wide.

Sankar Roy was called into action again in the 81st minute. TRAU substitute Khanngam Horam curled in a low shot from long range which was expertly tipped away by the Mohammedan Sporting custodian.

The experienced Mohammedan Sporting backline managed things well in the closing stages of the contest and saw off any potential TRAU attacks for a hard fought 1-0 victory.

Mohammedan Sporting right-back Vanlalzuidika Chhakchhuak was named Hero of the Match for his solid defensive display against the likes of Bikash and Poku.

The result saw Andrey Chernyshov’s Mohammedan Sporting rise to sixth place in the standings with six points. TRAU, on the other hand, have slipped to seventh position with four points.