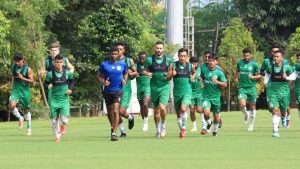 Jamshedpur FC head coach Aidy Boothroyd is optimistic ahead of the crucial away encounter against ATK Mohun Bagan. The gaffer opined, “we can give them (ATK Mohun Bagan) a few problems as well” while sharing his thoughts in the pre-match press conference ahead of tomorrow’s game at the “Mecca of Indian Football”.

The ISL defending shield winners didn’t have the best start to the season with just one win and four points from eight matches. Injury to key players has been another big blow for the Men of Steel during this testing period.

After consecutive losses against Chennaiyin FC, East Bengal FC, and Kerala Blasters, Aidy Boothroyd managed side eyes to bounce back on winning tracks while they face ATK Mohun Bagan.

Speaking on the next match Aidy said, “This will be a difficult game for us but not insurmountable”.

He further added, “We should start climbing up the table and move away from the bottom because we don’t want to be there”.

On the eve of the match, Jamshedpur FC also announced the arrival of foreign midfielder Rafael Crivellaro, who has joined the Men of Steel for the rest of the season. Speaking on

The Men of Steel will look to turn the odds in their favour while facing ATK Mohun Bagan. Bagging full points is all that the team now needs to gather the momentum and get back on winning ways.

Jamshedpur FC take on ATK Mohun Bagan tomorrow, at 7:30pm at the Saltlake Stadium in Kolkata.