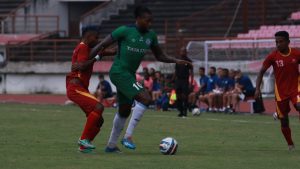 Gaffer Aidy Boothroyd started the game fielding only three foreigners Peter Hartley, Wellington Priori, and Jet Emmanuel-Thomas. Ishan Pandita opened the score for the Men of Steel in the early minutes of the first half. He doubled the lead within minutes making it a brace for himself. Thereafter Boris and Ritwik found the net making it 4-0 before half-time.

Coming back from the break the Tata Motors side seemed better than their start as they created chances while trying to maintain a better defensive shape. But Farukh Choudhary ensured to keep the gates open as he found the net. Finally, Ishan scored the winner making it a 6-0 win for the Men of Steel.

After the friendly fixture, Tata Motors head coach G.B. Singh said, “This is one of the proudest moments of my life as Jamshedpur FC played against our team (Tata Motors). I am sure that our young players received a lot of technical knowledge from today’s game which will help them enhance their development. The best part is, due to this friendly our players got to experience a level of gameplay way higher than the JSA League. We want to thank Jamshedpur FC for providing the best facilities and platform to our local teams to showcase their talents.”

Jamshedpur FC gaffer Aidy Boothroyd said, “This I think was a great opportunity for all of us. As we could experience the talents who won the JSA Premier League recently. They also got an opportunity to play against an ISL side. I thank the club and the Tata Motors management for arranging this kind of a friendly as I believe these games inspire a lot.”

Jamshedpur FC is scheduled to play Tata Steel next in a pre-season friendly on September 4.