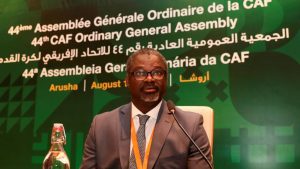 Incumbent President of The Gambia Football Federation Lamin Kaba Bajo has been re-elected to steer the affairs of Gambian Football on Saturday, August 27 in Banjul.

The incumbent who earlier this month elected the WAFU A President will serve a final four-year mandate.

The 57-year-old won the polls with 51 votes while his opponent and former executive colleague Sadibou Kamaso pulled 25 votes from the 77 available votes. There was on invalid vote.

“I want to call on my colleagues in Team Restore Confidence that we believe we all have the same objectives on developing Gambian Football,” Bajo said.