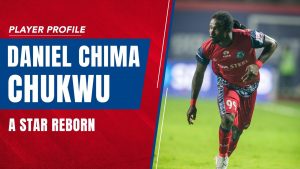 Daniel Chima Chukwu joined the Men of Steel in the January transfer window of 2022, and it wasn’t expected to work. After all, Chima’s high profile move to SC East Bengal at the start of the 2021-22 season far from met expectations.

The Nigerian scored just twice for the team so heads turned when he was signed by Jamshedpur FC in January, but the move paid off big time.

The forward found the back of the net seven times, and played a major role as the Men of Steel lifted their first ever League Shield trophy at the end of the campaign.

The Indian Super League has seen some terrific forwards over the years, but few the profile of Chima.

His power, skill and match awareness are second to none, making him a serious danger inside the box, and his ability to hold up play allows other forwards to make runs and receive the ball.

Chima’s illustrious past as a player suggests he certainly did pack a punch in attack. He made his name in Norwegian football, playing for multiple time champions FK Molde where he was coached by former Manchester United striker and manager Ole Gunnar Solskjaer.

After a few successful seasons at the club, the 31-year-old moved to China where he banged in the goals for Shanghai Shenxin before returning to Europe to play at Legia Warsaw in Poland.

Impressing last season at Jamshedpur FC was one thing, but Chima has carried that form forward to this campaign as well, where despite the team not winning too many games, he continues to shine up front.

Chima has scored thrice for the Men of Steel, including a lovely goal in the team’s last game against Kerala Blasters FC in Kochi. That delicate dink took the Nigerian to the top of the all-time scoring charts for Jamshedpur FC, an honour that was only previously held by Greg Stewart at the club.

In the coming games, Chima will be extremely important as he forges a solid relationship up top with fellow forward Ishan Pandita.

Their combination seems like it might be working, but the duo would need to convert as many chances as possible if Jamshedpur FC are to push up the table.