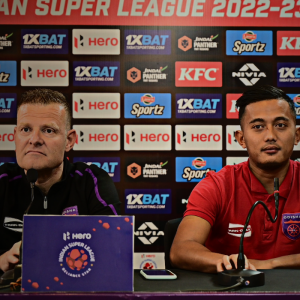 Josep Gombau and Isaac Vanmalsawma attended the pre-match press conference and briefed the media ahead of their game tomorrow against East Bengal FC.

Last time against East Bengal FC, you and the team made a complete turnaround in the second half and went on to win the game. What are your thoughts about tomorrow’s encounter?

Josep Gombau: It is a very important game for us tomorrow. I told the players that we need to win this game, especially at home. Considering the fact that East Bengal FC is doing well, they beat Bengaluru FC in the last one it will be a tough encounter tomorrow. The team has been working hard because they know it is a very crucial game for us. We have been preparing for the game very well. Tomorrow is a Saturday and we are expecting our fans to create an electric atmosphere at the stadium.

What’s the atmosphere in the dressing room like right now?

Josep Gombau: We are concentrating on everything that is important to us to win the game. These three points are very crucial to us. The approach stays the same for the boys in this game. Now it is time for us to come back to winning ways. The boys are ready to take on tomorrow’s challenge.

Diego Mauricio made the difference in the last game against Mumbai City FC and was also involved in providing two assists when we faced East Bengal FC in Kolkata. Are you expecting a similar kind of performance from him tomorrow?

Josep Gombau: At Odisha FC we expect all the players to put their best foot forward when it comes to performance. Diego was crucial in the last game when he scored 2 goals and showed what he is capable of. I expect him to display a similar performance tomorrow as he is a very important player for us.

Will Saul Crespo and Osama Malik be involved in the game tomorrow?

Josep Gombau: Yes both of them are available for tomorrow. It is good news for us that they have fully recovered. We have full-strength capacity tomorrow and that has boosted my options. The players who were injured or were recovering are slowly coming back to the squad which will help us for the remaining games.

How has it been so far for you in the league?

Isaac Vanmalsawma: It has been good so far. I scored in the first game and that was very special to me. There are some things I need to work on to show what I am capable of.

Your thoughts on the game tomorrow…

Isaac Vanmalsawma: We didn’t get the results we wanted in the last few games. The players are highly motivated to shrug off past performances and go for the win tomorrow. I really want to help the team achieve its targets by contributing more.