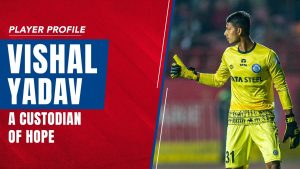 In a season where the going has been tough for Jamshedpur FC, one young man has stood up and stood out from the rest, emerging as perhaps the biggest positive of the season so far.

Vishal Yadav has, in a short period of time, made himself the toast of the Steel City, making his debut for Jamshedpur FC against ATK Mohun Bagan in early December and never looking back.

Since his debut, such has been the impact of the youngster, that it can be argued that he is now the first choice goalkeeper at the Men of Steel, keeping established shot-stopper TP Rehenesh out of the starting eleven on a regular basis.

Vishal Yadav is proof of a thriving and successful youth system. The famed Tata Football Academy (TFA) in Jamshedpur has produced some incredible talent over the years, and Vishal is a product of the system that the academy can be very proud of. He worked his way up the youth team ranks before joining the first team ahead of the 2020-21 Indian Super League season.

Jamshedpur FC head coach Aidy Boothroyd has been very appreciative of the 20-year-old’s performances this season, and it is hard to argue against it. The keeper has been in sparkling form, and despite not keeping a clean sheet so far, his athletic saves have won plaudits all over.

He may be born in the state of Uttar Pradesh, but the Jamshedpur FC faithful have taken to Vishal like one of their own, knowing that the full potential of the custodian will only be realised in the coming few seasons.

While his performances on the pitch are extremely noteworthy, what makes Vishal perfect for the Men of Steel is his attitude on and off the pitch.

The goalie goes about his business with minimal fuss, complete dedication, and a quiet confidence that highlights how much he trusts his own ability.

The Men of Steel take on East Bengal this Friday, and Vishal Yadav is once again expected to light things up and lead from the back and hopefully all the way to victory.

A few of his saves this season have had fans jumping out of their seats and applauding, and now heading back to the same venue where he made his debut, Vishal will have an even higher level of success in mind.