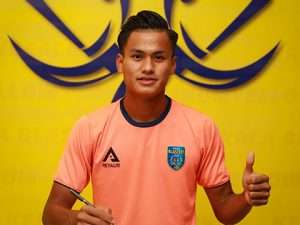 Kerala Blasters FC have announced the contract extension of their young midfielder, Jeakson Singh Thounaojam with the club. The 19-year-old Manipuri player will be contracted with the club till 2023.

Jeakson was born in a football-loving family wherein he was introduced to the sport by his father who was also a coach. His career started at the age of 11 when he joined the Chandigarh Football Academy where he spent over four years. Impressed by his athleticism and skill, he was scouted by Minerva Punjab FC and joined their academy in 2016. After spending a year with the reserves, the strong central defensive midfielder was promoted to the first team before joining the Indian Arrows on loan. In 2017, Jeakson was picked up for the Indian team that took part in the U-17 FIFA World Cup and scored India’s first and only goal ever in a FIFA tournament.

“I’m very happy that Jeakson has extended his contract with us. He’s a true professional and always portrays a good attitude in training with a desire to improve. He is an important player in our team, and I’m happy to see him develop with us,” said Karolis Skinkys, Sporting Director, Kerala Blasters FC.

Jeakson’s outstanding performances in the FIFA U-17 World Cup and in the I-League with Indian Arrows saw him sign for the Kerala Blasters Reserves in 2018. He was promoted to the First team squad during the 2019-20 ISL season wherein he played an integral part of the midfield and made 15 appearances that season.

“I am delighted to extend my contract with Kerala Blasters FC. The management has a great vision for me and the club, and I am really excited to be a part of this project. The club has the most passionate fans in the country, and I can’t wait to play in front of the yellow sea at Kaloor soon,” said Jeakson Singh on his contract extension with the club.