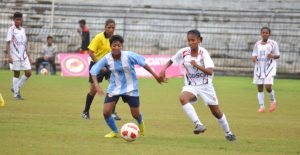 Day 11 of the 2016 edition of the Junior Girls National Football Championship is being held in Cuttack, Odisha with two games played in total across the match day at the Barabati Stadium.

Match No-34: Jharkhand 0-1 Odisha – Barabati Stadium
Hosts Odisha scored a 1-0 win over Jharkhand with Anima Malik scoring the goal as early as the 4th minute.