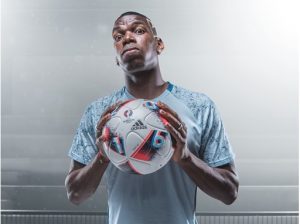 adidas has claimed the title of “most shareable brand” during a summer of football that has included the UEFA Champions League Final, Copa America and UEFA EURO 2016. Following on from the achievement of “most talked about brand” during the 2014 FIFA World Cup in Brazil, this time around adidas has placed a strategic focus on “quality” – measuring shares as the most valuable form of consumer interaction on social media.

During the UEFA EURO 2016 tournament in particular, adidas was able to dominate the daily share volume for 27 of 30 days from the tournament’s first game on June 10 and the final on July 10. This resulted in a total of 1.17m shares, more than twice the number of the next biggest brand.

One particular highlight for adidas was that its share of voice, in terms of hashtag usage, was seven times higher than the next best brand. In total it received 685k hashtag mentions across Instagram and Twitter, meaning that as well as having the most shareable campaign content on social media, adidas was also by far the most visible brand.

adidas focussed its efforts on the strong relationships the brand has with its partners – leveraging short films, images and GIFs relating to federations like Germany, Wales, Belgium and Spain as well as key players like Paul Pogba, Mesut Özil and Gareth Bale. The brand also displayed an innovative approach to its UEFA rights with access to match footage, exclusive post-game player portraits, and in-stadia LED boards utilised as content streams throughout the tournament.

Product wise, the focus was around the Mercury Pack footwear worn by a number of the world’s biggest stars with all storytelling designed to contextualise the feeling of being first and ultimately landing the brand’s campaign message of “First Never Follows”.

Commenting on the success of the “First Never Follows” campaign, adidas Senior Director Global Brand Communications Football, Florian Alt said, “Following the success of the 2014 World Cup in Brazil, where adidas was crowned the most talked about brand, we have once again redefined the rules of real time marketing during the summer of 2016.”

“In pursuing a qualitative metric, like most shareable, the results imply that adidas’ content featuring the First Never Follows messaging has resonated on a deeper, more meaningful level. Our products and strong relationships with our assets set us apart from the competition, driving shareability and cementing our position as the number one football brand.”