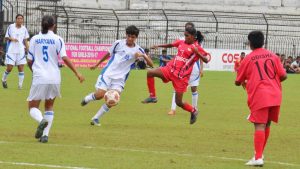 Day 13 of the 2016 edition of the Junior Girls National Football Championship is being held in Cuttack, Odisha with two games played in total across the match day at the Barabati Stadium.

Match No-39: Haryana 1-0 Odisha – Barabati Stadium
Haryana scored a 1-0 upset win over hosts Odisha to reach the finals of the Junior Girls National Football Championship with Nisha scoring the lone goal for the winners in the 78th minute.