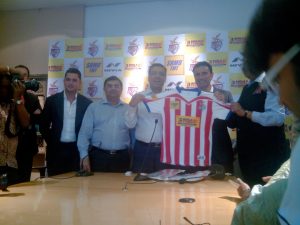 The three co-owners in Sanjiv Goenka, Harshavardhan Neotia and Utsav Parekh were present on the occasion with Sanjiv Goenka introducing the clubs new coach by saying, “I take this opportunity to welcome our Head Coach José Molina to Atlético de Kolkata family and believe that he is the right coach for the team. Molina will come with his wealth of technical and managerial experience as a player and coach which will be an asset for the players to learn and imbibe from and the team management to acquire the best possible team for the upcoming season.”

New head coach Molina said, “I am really excited to be part of Indian Super League and want to thank the management of Atlético de Kolkata for this great opportunity. ISL has put Indian Football on the global map and now the talent available here is being talked about in European and Asian countries.”

“My association with Atlético de Madrid had given me some of the most unforgettable moments in my career. Today, when I take charge as the coach of Atlético de Kolkata I will be carrying forward a legacy and passion of fans. My role as a coach will be to develop the best bonding and understanding between the players who come with diverse background and experiences across the world. I am eager to get started and look forward to the season 3 of the tournament,” Molina added.

Atletico de Kolkata have already signed 19 players ahead of their campaign in ISL-3. Amongst the retained players are Indians in Arnab Mandal and Jewel Raja besides retained foreigners in Iain Hume, José Luis Espinosa Arroyo (Tiri), Sameehg Doutie and Ofentse Nato.

Meanwhile the ATK team will depart at the end of August for a pre-season training camp at the Los Angeles de San Rafael training ground in El Espinar, Segovia in Spain.