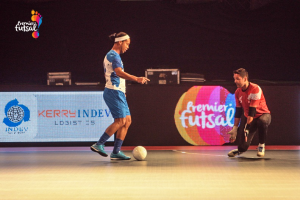 The inaugural edition of Premier Futsal kicked-off at the Jawaharlal Nehru Indoor Stadium in Chennai tonight with Mumbai beating Chennai and Kolkata getting the better of Goa in identical 4-2 wins.

Mumbai overpowered Chennai in the first ever Premier Futsal game in Chennai. Ryan Giggs played a starring role as they put together a solid defense and gave Chennai a master-class on counter-attack.

Giggs took the charge against Falcao, the Pele of Futsal, and came out on top to claim the first game of Premier Futsal. Giggs has been with Manchester United for almost 3 decades playing football, but today was his debut on the Futsal pitch. Mumbai 5’s strike force had the firepower of the Giggs and Foglia who won the Best Futsal Player award in 2003.

Mumbai opened the scoring after they won a penalty. Sirilo’s handball allowed Foglia to step up and score a calm penalty sending the keeper the wrong way. In the first quarter, Chennai had the bulk of the chances but couldn’t back their flair play with accurate finishing.

The second quarter started badly for Chennai going two goals down quickly. Mumbai robbed Chennai of possession and Angellot showed brilliant piece of ball control to leave the keeper on the floor and blasted the ball into open net to claim Mumbai 5’s third goal.

Chennai kept possession but Mumbai’s solid defence ensured they remained a step ahead in the second quarter. Mumbai were employing the classic counter tactic breaking every time Chennai lost the ball. Falcao continued to display his full array of tricks but Mumbai kept hold of their 2-0 lead at half time.

It takes a minute for the course of the game to change in Futsal, Chennai 5’s could not be ruled out of it at any stage. Chennai almost got a goal back as Sirilo’s shot stung the bar and went out of play.

Ryan Giggs was seen in all his elements by the third quarter has he produced the first nutmeg of Premier Futsal and showcased his class with a few no-look passes. The United legend set up Foglia for his second and Mumbai’s 3rd on the night. He might have been out of play for a while, but he sure didn’t look out of touch.

Mumbai 5’s kept going up gears as the game went on. Ramirez made it four with a wonderful side foot finish into the top corner. Chennai 5’s finally opened their account with Sirilo toe poking one in the back of the net, taking advantage of a miscommunication in Mumbai’s defence. Falcao pulled the second goal back as he thrashed one into the net after going past a couple of defenders.

At the end of the of the final whistle, Mumbai took home the first three points of Premier Futsal blowing away Falcao’s Chennai 5’s 4–2.

In the day’s second match, Kolkata defeated Goa 4-2 as Hernán Crespo led from the front in an engaging Premier Futsal encounter against Ronaldinho’s Goa 5’s.

It could have been a dream start for Ronaldinho as he almost produced the first goal of the game with a typical no-look pass to Rafael that was saved by Cidao.

Goa suddenly found themselves two goals down in a matter of minutes. Pula was the first one to find the back of the net with his head after a deflected cross. Then, we had the first Indian goalscorer of the tournament as Goa found themselves in a 3 on 1 situation and Crespo setup Mohammed Islam for a simple tap in.

Ronaldinho tried to spark some life into the Goan attack in the 2nd quarter. He tested Cidao with a neat drag-back flick but he was too close to the keeper with all his angles closed down and his back to goal.

Just after the restart, Goa got themselves back in the game. Rafael’s toe poke deflected off the goalkeeper in his attempt to save it and landed in the back of the net. The chance was created after a great pick out by Georgievsky. Goa found themselves two goals behind yet again as Carioca’s freekick fooled the defence with a short pass to Crespo and his striker’s instinct kicked in finishing with aplomb to make it 3-1.

Goa hadn’t given up on the game yet as Vampeta made it 3-2 before the end of the 3rd quarter. A slack pass from Pula deflected of Rafael into the path of the Brazil-born Italian who put it into an open goal. Kolkata restored their two-goal cushion in the 4th quarter as luck was in their favor. As they went on the attack, a shot at goal ricocheted off Mohammed Ahtesham Ali and the ball rolled into the open net with the keeper in no-mans land.

Ronaldinho had a couple of chances after that to score but Kolkata held on for a 4-2 win.