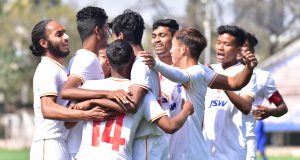 Bengaluru FC ended their BDFA Super Division campaign with a 2-1 defeat of Kickstart FC at the Bangalore Football Stadium on Tuesday. The result sees BFC finish second in the standings, with thirty points from twelve games; a solitary point behind title-winners FC Bengaluru United.

The Blues Colts were on the attack right from kickoff, and almost tested Kickstart custodian Jayanthkumar Krishnamurthy’s reflexes before the opponents’ rearguard regrouped and saw the ball go out for a goal kick.

In the seventh minute, Emboklang Nongkhlaw broke the offside trap with a well-timed run to latch onto Kamalesh’s pass, got into the box and took the ball past Jayanthkumar before the ‘keeper brought down. Despite calls for a penalty, the referee decided against awarding one.

The Blue Colts continued to push for the opening goal and were rewarded in the 20th minute when Emboklang, off-balance around the penalty spot, did enough to guide Manish Chaudhary’s cross into the bottom corner and break the deadlock.

Edwin Rossario’s scuffed shot from the edge of the box three minutes after the goal, straight into Sharon Sivan’s gloves, was Kickstart’s only shot on target in the first half, as the youngsters did well to restrict them to attempts from outside the box.

Just past the hour mark, Shivasakthi had the chance to double the lead when he found himself one-on-one with the ‘keeper but couldn’t find the finish. The No. 9 had another chance as the game moved into the final ten minutes, but Jayanthkumar did well to push his effort away from the goal.

Against the run of play Kickstart took the lead with eight minutes left on the clock. Awarded an indirect free at the edge of the box, the Blue Colts defence managed to block the initial effort but Satish Kumar got to the rebound and saw his lob sneak into the top corner.

However, it was the Blue Colts who had the last laugh when Muhammed Inayath got to the ball in the box and dinked his effort past the onrushing Jayanthkumar to put Bengaluru back in the lead with virtually the final kick of the game. 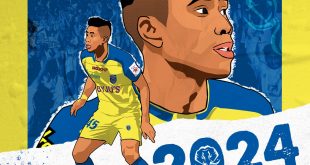