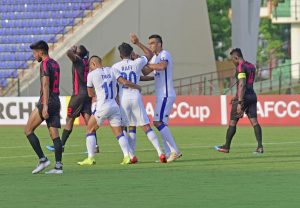 Chennaiyin FC travel to Nepal and face Manang Marshyangdi Club in a must-win encounter in the final group game a week later Wednesday, June 26. Chennaiyin FC will also need Abahani Limited Dhaka to drop points against Minerva Punjab FC so as to top the group and qualify for the knockout stage.

Back in action after over a month, Chennaiyin FC made one change to the side that lost 3-2 to Abahani Dhaka in the last matchday in May. The suspended Brazilian Eli Sabia made way for Mizo defender Zohmingliana Ralte, who slotted in alongside Chennaiyin FC skipper Mailson Alves at the back.

Chennaiyin FC striker CK Vineeth was handed an early caution, when he clashed with the onrushing Minerva Punjab FC keeper Arshdeep Singh while chasing a through ball. The goalkeeper sustained a knock to his face following the collision and had to be rushed for treatment in an ambulance. He was replaced by Bhaskar Roy in goal.

Thereafter, both sides were sloppy in possession, giving the ball away cheaply. It was a stop-start affair which Chennaiyin FC grew into, creating their first big chance with quarter of the game gone.

Isaac Vanmalsawma floated in an inviting ball at the far post, with midfielder Anirudh Thapa making a late run into the box. But Thapa’s first time volley only managed to find the side netting.

With Chennaiyin FC seeing more of the ball, Minerva Punjab FC resorted to playing the long ball, finding it difficult to break through the visitors’ ranks. With half hour gone, the referee called for a water break as both sides took a quick breather in the humid Guwahati conditions.

Thapa had another glorious chance moments after the restart, when he ran on to Nurain’s under-hit backpass for the keeper. The India international’s touch to round the keeper was a bit heavy as a Minerva Punjab FC defender cleared the lines frantically.

With half-time approaching, Chennaiyin FC custodian Karanjit Singh was called into action for the first time in the tie. Minerva Punjab FC striker Samuel Lalmuanpuia’s dipping shot from distance was tipped over by the keeper.

Into eight minutes of injury time at the end of the first half due to Arshdeep’s injury, Amandeep Singh’s long ranger beat Karanjit but clattered the upright as Minerva enjoyed a bright spell going into the break.

Chennaiyin FC continued to dominate after the break, creating a number of half chances with Thapa at the heart of the action. But Chennaiyin FC’s finishing was lacking as the game went past the hour mark.

Minerva Punjab FC then took the lead on the counter against the run of play through Samuel. The Minerva Punjab FC No. 9 carried the ball to the edge of the Chennaiyin FC box before slotting it into the bottom corner past Karanjit.

Into the last quarter of the match, Chennaiyin FC made two quickfire changes as Thoi Singh and Mohammed Rafi replaced Isaac and Francisco Fernandes respectively. And Germanpreet Singh came on for Vineeth into the last ten minutes of regulation time.

Chennaiyin FC kept chipping away at Minerva Punjab FC and eventually drew level on the stroke of 90 minutes through 37-year-old Mohammed Rafi. The second half substitute took a touch from Thapa’s cross from the left flank and blasted it into the top corner to make it 1-1. This was Rafi’s first goal of the season and third in the AFC Cup, having scored two goals for Mahindra United back in 2007.

Rafi then had a glorious opportunity in stoppage time to make it 2-1 from a similar opportunity, this time from a cross from the right. The striker’s right-footed volley went agonizingly high as it ended all square.