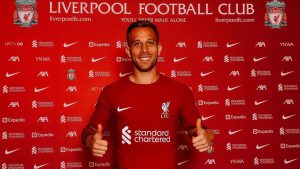 Liverpool FC have confirmed the signing of Arthur Melo on loan from Juventus FC for the remainder of the 2022/23 season, subject to international clearance.

The Reds have moved to bolster their midfield options on transfer deadline day with the acquisition of the 26-year-old, who finalised the move at the AXA Training Centre on Thursday.

Arthur arrives after two seasons with Juve, where he made 63 appearances and scored one goal after signing from FC Barcelona in September 2020.

Arthur said, “I’m really, really happy to be here wearing this great shirt with this famous badge that represents so much in world football, it’s a dream.”

“We talked a lot, and our ideas and visions were a good fit so I’m sure it was the right choice. I’m really happy and highly motivated to continue living my dream on the pitch and giving my all in a Liverpool shirt.”

Arthur began his senior professional career in his native Brazil with Gremio. He tallied 50 appearances during four seasons with the Porto Alegre club before securing a switch to Barcelona in 2018.

In two years at Camp Nou he lifted LaLiga and the Spanish Super Cup, representing the club on 72 occasions in all competitions and scoring six times.

He also gained his first experience of playing at Anfield, coming on as a 75th-minute substitute in Liverpool FC’s epic UEFA Champions League semifinal, second-leg comeback in May 2019.

Arthur, who has 22 caps for Brazil to date and lifted the Copa America in 2019 alongside Alisson Becker and Roberto Firmino, moved to Italy a year later before finalising today’s transfer to Liverpool FC.

He added, “Liverpool have a wonderful history in football. I’ve played against Liverpool, I know what it feels like to be in the stadium with the fans behind them.”

“I was with the opposition and now I’m on the right side so I’m really excited. It’s a massive club with a great manager, great players. As I said before, it’s a dream to be here.”