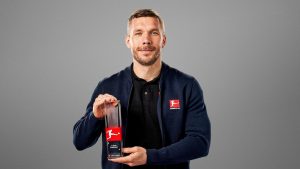 The “Bundesliga Legends Network” has another prominent addition: Lukas Podolski (36) is the latest ambassador for the Bundesliga. As one of the most popular German players in world football, the 2014 FIFA World Cup winner will be representing the Bundesliga across the globe and engaging with its unique global fanbase.

“It is a very special honour for me to become part of the team – even more so while I am still active as a professional,” Podolski said. “I am very excited to represent the Bundesliga and to contribute to getting even more people around the world excited about German football. It is no secret that I enjoy being in direct contact with fans – so I am very much looking forward to my future assignments in close cooperation with the Bundesliga.”

Podolski made his debut in Germany’s top flight in 2003 for 1.FC Köln. The striker played a total of 240 matches (94 goals) in the Bundesliga and Bundesliga 2 for his hometown club Köln and for FC Bayern München. In 2008, he won the double of the Bundesliga championship and the DFB Pokal with FC Bayern. After spells in England, Italy, Turkey and Japan, Podolski now plays for the Polish first division team Górnik Zabrze – in the neighbouring town of his birthplace Gliwice. Podolski made a total of 130 international appearances (49 goals) for the Germany national team between 2004 and 2017

Apart from Makoto Hasebe (Eintracht Frankfurt), Podolski is the only still playing member of the “Bundesliga Legends Network”, which was founded by the DFL Deutsche Fußball Liga in 2017 and includes the likes of Jürgen Klinsmann, Philipp Lahm, Lothar Matthäus, Jay-Jay Okocha, Claudio Pizarro and Zé Roberto.

Selected for their unique status as trailblazers in the German top flight, the members of the “Bundesliga Legends Network” act in a variety of ways, particularly in their respective home countries and in the countries to which they have strong connections through their careers. Be it as expert analysts for international media or as part of Bundesliga Experiences, youth football camps and CSR initiatives, the team of Bundesliga Legends aims to inspire fans around the world by providing direct and regular touchpoints, and drive awareness of the Bundesliga globally.

Former Ballon d’Or winner, Lothar Matthäus said: “Lukas Podolski instantly became a fan-favourite; not only because of his immense talent and passion, but also because of his ability to relate to the fans and engage with them. As well as his fantastic achievements in the Bundesliga, I have special memories of him as a German international, particularly as he made his debut at a friendly game against Hungary 2004 when I was Hungary’s national team coach. We all knew he will become a special player, and I think he will prove to be a great ambassador for the Bundesliga, too.”

Fellow Bundesliga Legend Jürgen Klinsmann said: “Lukas is an incredible forward and has scored goals wherever he’s been, including at the highest level with the national team. Having played in England, in Italy, in Turkey, in Japan, and now in Poland, he knows first-hand the passion fans have for football globally. He is a very likeable personality and will be an inspiration and role-model for fans around the world as an ambassador for the Bundesliga.”

All members of the “Bundesliga Legends Network”: