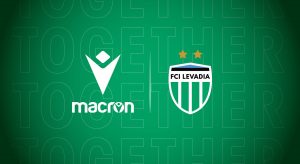 Starting this season, the Macron Hero logo will be seen on the shirts of FCI Levadia Tallinn, the club that plays in the Premium Liiga, the top division in Estonian football. Under the new partnership, Macron will supply match kits and technical teamwear to the ‘Green-Whites’. The team’s nickname derives from the first owner’s and the current club president’s family name Levada, which means “a plot of land near the house with a hay meadow, forest or garden trees”.

FCI Levadia Tallinn is one of the most prestigious clubs in Estonia. Over its brief history it has racked up 10 national championship titles, 10 Estonian Cups – a national record – and has even won 8 Estonian Super Cups. The team has played in European Cup competitions on various occasions and in the 2006-2007 season became the first Estonian club to get past two qualifying rounds and reach the final stages of the UEFA Europa League.

FCI Levadia Tallin will soon be receiving new match kits which, in line with Macron’s identity, will be original, exclusive and high-tech, and will also respect the club’s history and traditions.

“We are happy to confirm this new partnership with one of the top clubs in Estonian football,” declares Tigran Avetisyan, Macron’s Country Manager for Estonia. “FCI Levadia Tallinn will be celebrating only their 25th anniversary in 2023 but they already have an excellent record. We are looking forward to relating this story through high quality match kits and teamwear that might best express the club’s unique identity and colours.”

FCI Levadia’s marketing manager Alen Stepanjan, “We are proud to be a part of this partnership with an Italian sports brand Macron which has showed amazing growth last years and proved itself among the top level of football. It is important for us to wear ecologically sustainable training and match kits which also look stunning! FCI Levadia is happy to be the first club from the Baltics to represent Macron brand at UEFA competitions.”