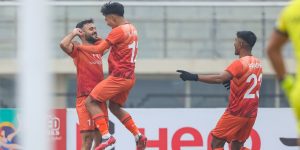 RoundGlass Punjab FC moved to the top of the table after registering a comfortable 3-0 win over Mumbai Kenkre FC in the I-League 2022-23 encounter at the Tau Devi Lal Football Stadium in Panchkula on Saturday, January 14.

A first-half brace by Juan Mera followed by a late second-half goal off a header from Luka Majcen meant RoundGlass Punjab maintained their perfect home record with the sixth victory.

Initially, Mumbai Kenkre FC raised hopes of their fans by taking the game right into the rival area from the very start. But the bravado lasted only three minutes as RoundGlass Punjab soon took control and shot into the lead. As Kenkre FC lost control of the ball, Brandon Vanlalremdika passed it to Juan Mera inside the rival box. Mera displayed his fine skills to move past his markers, which included the Kenkre FC captain Kiran Pandhare, before sending the ball past the custodian Padam Chettri.

The momentum was all in RoundGlass Punjab FC’s favour as they came close to doubling their lead on multiple occasions with Luka Majcen alone getting close to scoring on three occasions. The Slovenian saw his header being saved in the fifth minute with another going inches over the bar in the 19th minute. The RoundGlass Punjab target-man then hit the post on the volley in the 21st minute after he was set up by the captain Aleksandar Ignjatovic.

With Kenkre FC under great pressure, the hosts doubled the lead in the 27th minute. In a move that was started by Mera in his own half, the Spaniard linked up with Khaiminthang Lhungdim before running into the opponents’ half to launch a long ranger into the goal. Mera almost completed his hattrick in the 36th minute but his effort went over the bar.

Mumbai Kenkre FC made some inroads in the second half with a renewed vigour and almost caught the visitors off- guard off a counter attack in the 52nd minute. Kenkre FC substitute Lalhmangaihsanga Ralte received the ball in the attacking third and passed it for Aman Gaikwad, who struck low but goalkeeper Kiran Chemjong charged out to save the situation.

Five minutes later, the visitors once again nearly scored. In a cleverly executed set-piece, a corner aimed at the near post, taken by Gaikwad, was flicked towards the face of the goal by B Nongkhlaw. Ranjeet Pandre was able to get his head on the ball but it wasn’t enough as it hit the post before it was safely collected by Chemjong.

After being on the back foot for almost 20 minutes, the hosts finally regained control over the proceedings and went on to score again in the 83rd minute. Having missed many chances in the first half, Majcen finally got onto the scoresheet. From a diagonal ball played by Lhungdim, the Slovenian striker sent a looping header leaving Chettri no chance.