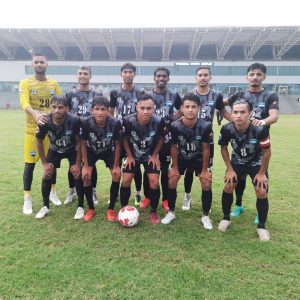 The first goal came from a corner. It was taken short and after a quick give and go, and the ball was swung in beautifully for Lovepreet to head in and make it 1-0 to Minerva Delhi in just the 2nd minute.

In the sixth minute, a through ball was played into the path of Gwgwmsar, and the youngster beautifully lobbed the ball over the goalkeeper for 2-0.

The third goal came after a poorly-taken goal kick which went straight to a Minerva Delhi player. They quickly transitioned from defense into attack as a through ball was played into Sadananda, who slotted it past the goalkeeper with ease.

Minerva Delhi then won a freekick 25 yards out. Sagar stepped up to take it and placed it perfectly beyond the wall to make it 4-0.

Gwgwmsar then got his next couple of goals in quick succession. In almost a repeat of Lovepreet’s goal, Minerva Delhi again took a corner short, and this time the ball was driven into the box. It was crossed in for the youngster, and he made no mistake in side-footing it into the back of the net.

In the following minute, Minerva Delhi again mustered up an attack, and Gwgwmsar was first to react after some chaos in the box to get his hattrick and make it 6-0.

Gwgwmsar’s fourth and fifth came in quick succession again as Minerva Delhi ran riot. The seventh goal was an easy tap in while the eighth came after a well-worked move from on the right.

Sadananda added another to his tally in an almost repeat of the eighth goal, which was a cross from the right and finish from the near post.

The ninth goal was perhaps the best of the lot. Some sumptuous skills from Renedy saw him go past three players, enter the box and smash home. Minerva Delhi went into half-time with a 9-0 lead.

The continued Running riot in the second half.

Kuntal joined the party in the second half as he got Minerva Delhi’s 10th goal, before Gwgwmsar made it 11 from the penalty spot.

The next three goals all came from corners, two of which were scored by Gwgwmsar and one from Lovepreet.

The fifteenth was a beautiful backheel from Lovepreet again to get his hattrick.

Gwgwmsar got another two, before Renedy and Dheeraj added two more. Ashish got the next one, and then Renedy got his hattrick in the 86th minute. Dheeraj also eventually got his brace.

Harsh then came on and made it 25-0, before Gwgwmsar capped off a stunning performance in the 90th minute to get his 11th and Minerva Delhi’s 26th.

With that, Minerva Delhi registered one of the biggest wins in Delhi football history as they thrashed Jaguar FC 26-0.