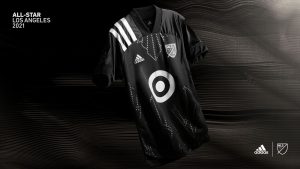 Major League Soccer unveiled the jersey for the best of MLS when they meet the Liga MX All-Stars in the 2021 MLS All-Star Game presented by Target. The match, which will take place on August 25 at LAFC’s Stadium in Los Angeles features MLS versus Liga MX and will be broadcast in the U.S. on FS1 and Univision, in Canada on TSN and TVA Sports and throughout Mexico and Latin America on ESPN.

The MLS All-Star Game jersey celebrates Los Angeles as one of the premier sports cities in the U.S. and magnifies the culture of soccer and impact of the city on the global game.

The 2021 MLS All-Star Authentic player jersey will light up the night, symbolic to the city of Los Angeles. The Black jersey features unique reflective trims to shine on a backdrop of black and gold and the glitz and glamour of Hollywood. Inspired by Art Deco architecture in Los Angeles, the jersey is designed from adidas Aeroready performance fabric made up of stars and maple leafs that represent the U.S. and Canadian clubs of MLS. The right sleeve has the LA21 All-Star Game patch and the back-neck features LA staples and inspired icons of stars, ocean waves and freeways as well as the No. 25 to signify the 25th MLS All-Star Game.The All-Star jerseys are available for purchase now at MLSstore.com and adidas.com and will be available at select retail stores in the Los Angeles area in the coming weeks and in-stadium on gameday.