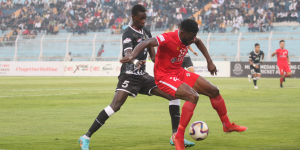 Henry Kisekka had missed a golden opportunity in the 24th minute. After being through on goal, a heavy touch meant the ball went too far from the Ugandan and was collected by Mohammedan custodian Sankar Roy.

For the home team, even though they enjoyed almost two-thirds of the possession in the first period, lone striker Abiola Dauda remained anonymous in the game while captain Marcus Joseph, playing in a deeper role struggled to find his usual rhythm. Meanwhile, new Kyrgyz recruit Mirlan Murzaev displayed his quality in flashes but was a little too selfish at times, opting for long-range shots on three occasions where he could have easily passed to his teammates.

The game sprang to life in the 32nd minute. Ramdinthara suddenly burst onto the scene on the right wing, putting in an inch-perfect cross for an unmarked Kisekka, who redeemed himself to head Aizawl FC into the lead.

But the visitors couldn’t keep Marcus Joseph quiet for long. Defender Sebastian Thangmuansang played into the home skipper inside the box, who turned and slotted the ball right into the bottom corner to restore parity.

Aizawl FC retook the lead just eight minutes into the second half. Thangmuansang failed to clear a tricky free-kick from Lalthanmawia into the six-yard box, and it fell for Kisekka, who guided it into the back of the net with an improvised touch from his knee.

As the game entered the final quarter, it was Mohammedan Sporting who had their foot on the gas pedal, however, goalkeeper Lalmuansanga made sure the visitors had their lead intact, making three crucial saves in as many minutes. Denying Milan Singh in the 72nd minute, Lalmuansanga went on to save a shot from Dauda from close range and then a long-ranger by Murzaev, which was palmed onto the crossbar before the ball was safely cleared by Japanese defender Akito Saito.

Two minutes from the end of regulation time, Aizawl FC missed the chance to seal what would’ve been their first away win of the season. On a counterattack, Sailo got free on the right wing, and after linking up with the substitute Jakob Vanlalhlimpuia, launched a shot which was saved by Roy. Ramdinthara’s follow-up on the rebound was cleared off the goalline by substitute Kean Lewis, which ultimately proved vital for the hosts.

As the clock ticked past 101 minutes, the Black and White Brigade received a free-kick 35 yards from the goal. Murzaev went low, cleverly finding Joseph who had broken free on the left, and the Mohammedan Sporting talisman took a touch before firing in with his ever-so-reliable left foot. The shot took a deflection off a red shirt and found its way past a hapless Lalmuansanga in the Aizawl FC goal.