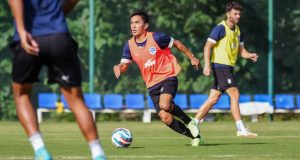 Bengaluru FC will target back-to-back wins for the first time this season as they welcome Odisha FC to the Sree Kanteerava Stadium in Bengaluru on Saturday. Simon Grayson’s men came out victorious in their encounter against NorthEast United last Saturday, and the fixture against the Juggernauts presents an opportunity for the Blues to keep their hopes of making the playoffs alive.

“I thought we played really well again. NorthEast made it difficult and played quite a low block. We passed the ball well, and were very positive that night. We showed what we’re capable of doing, that we’ve got a good spirit and that we’ll keep going till the end. The win was the most important thing,” Grayson opined, speaking on the game against NorthEast United.

The Englishman said his side’s focus has now shifted onto the game against Odisha FC, who are placed fifth on the League table. “Anytime you win a match, the players are jubilant, but you haven’t achieved anything. We’ve won, and then it’s straight back to work on Monday morning focusing on the game against Odisha FC. Our aim is to do one thing that we haven’t done this season and that’s trying to get back-to-back wins,” Grayson added.

The Blues’ defence will be tested against the quality of the Odisha FC frontline, led by Diego Mauricio, who has seven goals and four assists to his name. The Brazilian will be a potent threat once again on Saturday. Bengaluru FC, meanwhile, will look to rely on Roy Krishna’s experience and his record against Odisha FC, with the Fijian having scored six goals in seven encounters against Gombau’s side.

“I’ve seen what Odisha FC have done this year; they’ve evolved as the season has gone on. They’ve got some talented players and played very well against East Bengal in their most recent match. I have a lot of respect for their coach and what they’ve achieved. But tomorrow is about what we do. We want to play with energy and with a real desire to get the three points.”

A win on Saturday will place the Blues level on 16 points with Chennaiyin FC and just three points away from the final playoff spot, a narrative that adds more spice to what already promises to be an exciting game.

“Playing several of our remaining games at home is going to have an impact. It can be the difference in our efforts to get into the playoffs. What we need to do is to get our momentum back by winning our games at home,” Grayson mused.

Kick-off between the Blues and Odisha FC is scheduled for 5:30pm IST on Saturday, and will be telecast live on the STAR Sports Network, Disney+Hotstar and JioTV.