Mumbai City FC impress in their 4-2 win at Odisha FC! 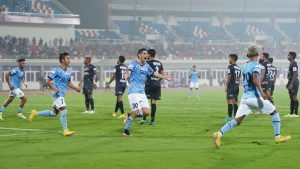 Mumbai City FC registered a comprehensive 4-2 win over Odisha FC away from home at the Kalinga Stadium in Bhubaneswar. Lallianzuala Chhangte was the standout performer for the Islanders with his two goals and an assist in the game that was very finely poised till the break.

Des Buckingham made three changes to the starting eleven that won against Chennaiyin FC at home. Mandar Rao Dessai, Apuia Ralte and Mourtada Fall were replaced by Vignesh, Vinit Rai and Rostyn Griffiths in starting eleven for the game against Odisha FC. Phurba started in goal; Rostyn Griffiths partnered Mehtab Singh in central defence. They were flanked by Rahul Bheke and Vignesh. Vinit Rai partnered the creative Ahmed Jahouh and the influential Greg Stewart in midfield. The Islanders had the familiar duo of Lallianzuala Chhangte on the right and Bipin Singh on the left wing in attack. Jorge Pereyra Diaz was leading the line for the Islanders against Odisha FC in this game.

Mumbai City FC started the game aggressively and were looking to put the Kalinga Warriors on the backfoot from the first whistle. They created the first chance of the game in the 2nd minute. Bipin found the ball at his feet in space on the left flank from the kick-off. He drove towards Odisha’s goal and then shot towards the far post. Jorge Pereyra Diaz was sliding in at the back post inside the box but the ball narrowly missed him as he failed to make contact, the scores stayed at 0-0.

The ball then immediately broke for Odisha FC from the goal kick. Some interplay in the Odisha FC midfield ended at Diego Mauricio’s feet. He broke towards goal from a difficult angle and tried beating Phurba with a shot from his weaker foot. But Phurba caught the ball comfortably. After 4 minutes of the game, both teams had shown intent to start quickly and attack.

In the 10th minute the next chance of the game broke the way of the Islanders. The pinpoint pass from Phurba found Bheke on the right flank. The Mumbai City FC captain then cut the ball inside perfectly for Jorge Pereyra Diaz, who set the ball up for Chhangte who registered the first shot on goal for The Islanders on the night.

The game was turning into a midfield battle as the centre of the park was being compressed by both teams. It was hard for any player to find time and space in the congested midfield in the early minutes of the game.

Odisha FC however slowly started to get chances. In the 19th minute of the game, Victor put in an accurate cross for Carlos who had made his way inside the Islanders’ box. His header was straight at Phurba who calmly collected the ball.

In the 26th minute of the game, the Juggernauts carved out another chance. Nandha had made a smart diagonal run behind the Islanders’ defence and was found by Sahil Panwar with a smart dink. He unleashed a venomous shot towards the Islanders goal but was kept out by an excellent save by Phurba.

By the 35th minute, the Islanders had also adjusted to the demands of the game and were getting into their passing rhythm.

In the 41st minute, the Islanders carved out a chance for themselves. Chhangte was found on the right flank in space. He put in a smart ball that made its way through to Bipin Singh on the left side of the box. He then played it back inside towards an on-rushing Jorge Pereyra Diaz, whose shot was just wide of the goal. The scores were still 0-0 but the game was slowly opening up.

In the 43rd minute of the game, another chance broke the way of the Islanders. Chhangte was found on the right side with a smart grounded ball behind the Odisha backline. He carried the ball into the box and played it towards Stewart at the centre of the box. The Scottish attacker failed to connect with the ball as the gilt-edged chance passed him by. The ball then found its way to Bipin on the far post who cut inside and unleashed a shot that was cleared of the goalline by an Odisha FC defender.

The final chance of the half was created by the Islanders. In added time at the end of the half in the 46th minute, Greg Stewart broke free on the left flank and drove towards the goal. He tried playing a smart ball at the end of his run but was dealt with by Amrinder in the Kalinga Warriors’ goal.

The referee soon after blew for halftime, as the game was finely poised at 0-0. Both teams looked dangerous in the attacking third but failed to open the scoring. Odisha FC were defending in numbers to keep the high-scoring Islanders at bay in the first half.

The Islanders started the second half on the front foot. In the 48th minute of the game they created the first chance of the half. Some intricate passing in midfield by the Islanders, saw Diaz break behind the Odisha defence. He shot on goal from point blank range but was denied a goal by Amrinder’s right boot.

In the 55th minute the Islanders took the lead. Jorge Pereyra Diaz was found by Chhangte on the right flank. The Argentine then turned on the style to thread the ball through with some nifty footwork back to Chhangte. The Islanders’ number 7 then drove into the box from the right and unleashed an unstoppable shot that came off the crossbar and went inside the goal past Amrinder Singh. The score read 1-0 in favour of the Islanders as the game from there on exploded into life.

Mumbai City FC’s lead did not last for long as Odisha scored an equaliser in the 60th minute. Mauricio picked the ball up in midfield. He drove towards the Mumbai City goal while sidestepping challenges. He played a smart one-two with Victor on the edge of the box and found himself in space inside the Islanders’ box. He then calmly slotted the ball past Lachenpa as the scores read 1-1.

Immediately after that Buckingham made the first substitution of the night as he brought off Greg Stewart for Alberto Noguera in the 62nd minute of the game. The Islanders slightly tweaked their tactical set up to allow their wingers to have more influence on the game.

The tactical tweak yielded instant results as in the 68th minute of the game the Islanders were awarded a free kick from which they took the lead again. Ahmed Jahouh got a chance from a freekick right outside the Odisha FC box, he went for goal as he unleashed a shot towards the goal. The ball, headed towards the top corner, was punched up in the air by Amrinder and fell kindly for an unmarked Bipin Singh who was following up hoping for a chance. He stroked the ball into the net with ease from point-blank range to make it 2-1 in favour of the Islanders.

Coach Buckingham then made his second substitution of the night hoping to manage the game. In the 70th minute, he brought on Rowllin Borges for Vinit Rai in midfield.

Josep Gombau made a substitution of his own in the 75th minute of the game hoping to inspire another comeback from his players. He brought on Pedro Martin for Issac to add more impetus in Odisha FC’s attack.

Mumbai City FC however had started to dictate proceedings as Odisha FC were finding it hard to create clear chances.

The next chance of the game came the way of Mumbai City FC in the 79th minute of the game. Chhangte was found on the left flank by a smart ball by Noguera. He then drove towards the goal and broke inside the opposition’s penalty box. He dummied two defenders inside the box to make space for himself as he shaped up to shoot with his right foot. He then released an accurate shot with his right that was diverted away from sneaking into the far post by a deflection.

A minute later in the 80th minute of the game Chhangte doubled the Islanders’ lead. Noguera won the ball in midfield and then turned expertly while holding off challenges. He then played a sumptuous through ball behind the Odisha FC defence towards Chhangte on the right flank. The Islanders’ number 7 put his foot in bravely to steal the ball off of Amrinder who was caught in no man’s land. Chhangte then composed himself and slotted the ball into an empty net right from the edge of the box to make it 3-1 in favour of Mumbai City FC.

In the 86th minute of the game, Noguera made it 4-1 for the Islanders. Chhangte was again found in acres of space on the right flank by a smart ball by Jahouh. He dummied his way past the Odisha fullback to make his way inside the box and laid the ball up for an on-rushing Noguera. The Spaniard slid in to put the ball into the Kalinga Warrior’s goal as the scores read 4-1 in favour of the Islanders.

Coach Buckingham then made his final changes in the game. In the 87th minute he brought on Vikram Partap Singh for Jorge Pereyra Diaz and Asif Khan for the star of the night Chhangte. Asif, who has risen through the ranks at Mumbai City, made his much-awaited ISL debut.

Odisha FC did not let up though despite the scoreline as they were still looking for goals in the dying embers of the game. A long ball towards the Mumbai City FC’s goal back post was headed towards the centre by Jerry. The ball fell to Mauricio who controlled the ball and composed himself. He then released a thunderbolt from right outside the box that arrowed into the right top corner of the Islanders’ goal. Mauricio scored his second of the match in the 91st minute of the game. The referee soon after blew for full time as the scores read 4-2 in favour of the Islanders.

Mumbai City FC extended their unbeaten run in the league to 12 with this comprehensive win over Odisha FC, the 7th on the trot. They also put an end to the Kalinga Warrior’s unbeaten home run this season with the 4-2 win on the night.

Mumbai City FC will welcome Kerala Blasters to the Mumbai Football Arena for their next game in the 2022/23 ISL on January 8. The game will kick off at 7.30pm IST.

Previous Jamshedpur FC VIDEO: Muhammed Uvais ahead of Kerala Blasters game!
Next Dejan Lovren is back at Olympique Lyonnais until 2025!