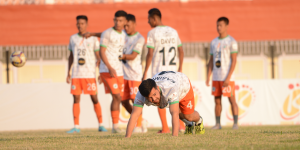 NEROCA FC will host Sudeva Delhi FC for the second round tie of the I-League 2022-23 at the Khuman Lampak Main Stadium in Imphal on Friday, November 18.

Both the teams will be entering the match following defeats in Round One. While NEROCA lost 0-1 to visitors Real Kashmir, Sudeva, too, lost at home, losing to Kenkre FC 1-2 in New Delhi. Before Friday’s tie, the two teams played against each other thrice. Both the teams won one match each and honours remained even in the other.

Talking about the defeat in their first game, NEROCA FC’s Head Coach Khogen Singh said: “We played really good football. On any other day, we would have scored but in the previous match, we remained unlucky. Against Sudeva, we have to play attacking football and we are fully prepared to go for three points. The boys are determined to give their best in tomorrow’s match.”

NEROCA’s Custodian Soram Poirei, too, spoke on the forthcoming game against Real Kashmir “All the players felt the pain and disappointment of defeat in the last game. We played well but couldn’t convert the chances. But all the focus is on the next game and we are confident of doing well,” he said. Asked about his view on Real Kashmir FC, Soram said: “They are a young and energetic side and they play good football.”

Coach Khogen Singh talked about the importance of fans in the home games. He made a direct appeal to the fans saying: “Please come and support us. We will give our best in the match.” 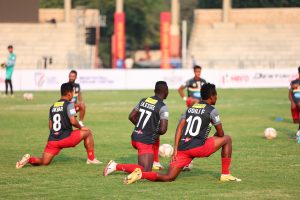 The Sudeva Delhi Head Coach Atsushi Nakamura of Japan was in awe of the city of Imphal. “I feel very happy–the food and the weather here is very good,” he said. On NEROCA FC, he said: “The opponents are a very good side. They are good on the build-up, so we have to manage the rivals’ attacking style of play.”

Sudeva’s Souvik Das, who came on as a substitute against Kenkre, said: “NEROCA are a good team, every year they have a fine squad. They have a good coach and they play a good passing game. Our team really want to bounce back. Everyone is positive about the next match and we are in it together as I said before.”

The match is scheduled to start at 4:30pm and will be broadcast live on Eurosport and DD Sports, and streamed live on the Discovery+ OTT platform.