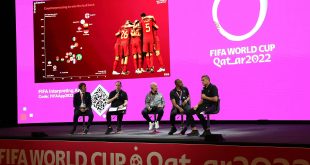 The UN’s leading anti-corruption agency, the United Nations Office on Drugs and Crime (UNODC), has released the findings of an important report focused on corruption, crime risks and wrongdoing associated with the transfer of athletes. The document recognises FIFA’s efforts in relation to its transfer system reform and the safeguarding initiatives.

The published advocacy paper is part of the ongoing initiative by the UNODC – through its Programme on Safeguarding Sport from Corruption and Crime, an integral part of the UNODC Global Programme against Corruption – to support governments, sports organisations and other relevant stakeholders in their efforts to effectively tackle corruption and crime in sport.

The advocacy paper Crime, corruption and wrongdoing in the transfer of football players and other athletes advocates the establishment of a research programme to develop a coordinated, evidence based approach with the goal of supporting efforts aimed at enhancing governance, transparency and accountability in systems used for the transfer of athletes.

The paper states: “The research programme would draw from and run in parallel to reforms of systems by other organisations used for the transfer of athletes, such as that by FIFA.” It also strongly recommends that governments, sports organisations and relevant stakeholders become increasingly aware of corruption, crimes and wrongdoings associated with the transfer of athletes.

The report continues: “Notably, the recent efforts to reform the transfer market made by sports organizations (e.g., FIFA), which include measures such as the establishment of a clearing house to process transfers and avoid fraudulent conduct, a licencing system for agents and the introduction of a cap on agent remuneration could help ensure greater transparency and accountability in the transfer market.”

The FIFA Clearing House Regulations and the amendments to the Regulations on the Status and Transfer of Players and to the Procedural Rules have entered into force on 16 November, after being approved by the FIFA Council last month.

Together with positive examples from various international and sport organisations, special reference is made by the UNODC advocacy paper on the FIFA Guardians Programme and the FIFA Guardians Safeguarding in Sport Diploma, a global education programme designed to strengthen and professionalise safeguarding standards across football. After the first round of FIFA World Cup group stage matches were completed, official figures …