New Macron made Bologna FC 1909 kits a homage to victory in the Mitropa Cup, 90 Years ago! 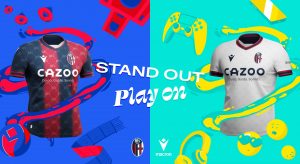 Bologna FC 1909 and Macron, the historic sponsor of the Red and Blues, have presented the new “Home” and “Away” kits that the team will wear next season. The shirts maintain the club’s traditional colours and designs, but boast an innovative style and refined graphics inspired by the world of fashion. The new kits also confirm the commitment of club and sponsor to environmental protection and sustainability, as they are made from Eco-Fabric, a material derived from recycled plastic.

The new “Home” shirt once again features four vertical red and blue stripes, meaning that next season’s stripes are slightly broader than those of last season. Rather than being distinctly marked, the stripes fade one into another thanks to a graphic pattern of alternating narrow lines in red and blue. The back of the neck is embellished with a stylised image of the Mitropa Cup, which Bologna won exactly ninety years ago, in 1932, becoming the first Italian club to win a major international competition.

The V neck and backneck are finished in the colours of the team and marked with the words “LO SQUADRONE CHE TREMARE IL MONDO FA” (THE TEAM THAT MAKES THE WORLD TREMBLE). The shirt features an all-over graphic on the front and sleeves, representing the world of fashion through the letters BFC, taken from the club’s logo, printed in relief. The Macron Hero logo is silicone printed on the right breast and the logo of Bologna FC 1909 on the left. The kit is completed by white shorts with a red and blue band on the leg. A similar band appears at the top of the blue socks, which also have the club name “BOLOGNA” in white in the middle and the Macron Hero logo at the bottom.

The “Away” kit is equally innovative and fashion-oriented. in this case, the shirt is in white and has a V neck with red and blue trim. The same combination of colours is repeated on the sleeve cuffs. The most striking feature of this shirt too is the embossed, all-over, tone on tone graphic based on the letters BFC.

On the back of the neck is the club’s motto “WE ARE ONE”, this time printed in blue. The right breast is decorated with a blue Macron Hero while the Bologna FC 1909 logo appears over the heart. The Away kit is completed by blue shorts with a band of red and blue on the legs and white socks with a red and blue band at the top.

The new kits for 2022-2023 are both Body Fit and made mainly from Eco-Fabric (EcoSirenaLight to be precise). They also incorporate an Eco micromesh panel in the back for light weight and excellent breathability.