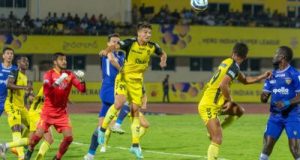 Hyderabad FC’s five-game winning streak came to a halt at the GMC Balayogi Athletic Stadium on Thursday as Chennaiyin FC put in a gritful performance in a 1-1 draw on their trip to the state of Telangana.

Bartholomew Ogbeche, the leading goalscorer in the history of the Indian Super League, added to his tally with an 87th-minute penalty after Petar Sliskovic (57′) scored for the visitors in an entertaining second half at the Maidaan.

The first half saw both teams cancel each other out, as no there were no clear chances in a tactical 45 minutes of football. Javi Siverio, Borja Herrera and Bart Ogbeche combined well at times.

Sliskovic and Julius Duker and Vincy Baretto had their moments but it was all square at the break but the game inevitably burst into life after the restart.

The Marina Machans scored from a set-piece, the first Hyderabad FC have conceded this season and Manolo Marquez’s side were behind for just the fourth time this season.

With half an hour to play, the changes rang in as Abdul Rabeeh, Joel Chianese and Aaren D’Silva had an impact after the goal. But it was Siverio who was resilient that won Hyderabad FC their spot-kick.

Siverio was too quick for Vafa Hakhamaneshi, who looked to clear the ball but caught the attacker and Hyderabad had their chance back into the game, which Ogbeche took with aplomb.

Hyderabad FC pushed for a winner late in the game, and did have a couple of half chances, but it was Ogbeche’s 60th ISL goal, his 30th in all competitions for Hyderabad FC, that saw the game end in a draw.

Nikhil Poojary, Nim Dorjee Tamang, Akash Mishra and Odei Onaindia all put in a solid performance at the back but Manolo’s side remain 2nd in the league table, with 32 points from 14 games.

Hyderabad FC are back in action when they take on East Bengal FC at the Saltlake Stadium on Friday, January 20.