Jamshedpur FC take on East Bengal FC in their next ISL encounter! 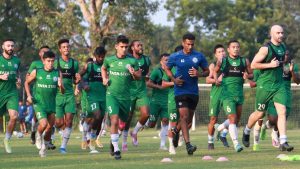 Jamshedpur FC were held to a 2-2 draw by Chennaiyin FC at the Furnace last time out, but the performance of some players was truly extraordinary, raising hopes of a victory this time around against East Bengal.

The players who shone in the last game may or may not perform the same way this time, but individual battles across the pitch may well decide the outcome of this key clash. So here are three key battles from this game:

It’s Manipur vs Mizoram on the Jamshedpur FC right wing as Boris Singh Thangjam potentially comes up against Jerry Lalrinzuala on Friday.

Keep in mind that Boris didn’t start Jamshedpur FC’s last game against Chennaiyin FC, but came on at half-time to affect the game on the right flank.

Capable of running the channels effectively, Boris has also played in the wing back position this season, and will relish the challenge of Jerry, who has bags of talent of his own.

This battle on the right could decide who owns the territory to cross the ball, and Jamshedpur FC will hope that the tenacity of Boris Singh helps him come out on top.

The battle of the Brazilians could see Rafael Crivellaro come up against Alex Lima in midfield on Friday, with both capable of turning the tide for their team.

What makes this clash even more exciting is the fact that Alex Lima is formerly of Jamshedpur FC, and knows a lot of the players on the opposite side very well.

This recent experience might help the midfielder to an extent, but Crivellaro’s recent form suggests he is well and truly ready to be the anchor man for the Men of Steel and this match could solidify his importance in the side.

Cleiton Silva was the hero for East Bengal FC when they played Jamshedpur FC in the reverse fixture back in November, scoring twice to inflict another defeat on the Tata Steel-owned franchise.

This time too, the striker will have his eyes set on goal, but could have another Brazilian trying to stop him from finding the back of the net.

With Dylan Fox yet to make his debut for the club, Eli Sabia is expected to be the guaranteed starter for the team, and was incidentally unavailable due to injury when these two sides clashed at the Furnace.

Sabia’s strength and superior reading of the game might give him an advantage against the in-form Cleiton, but it will surely be a task to stop the forward from having chances in front of goal.

All said and done, this is perhaps the battle that fans can expect to see outweigh the rest and make for some incredible viewing.