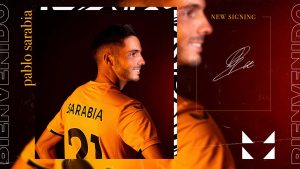 The 30-year-old has signed a two-and-a-half-year deal at Molineux, providing a first experience of English football on the back of representing Spain at the 2022 FIFA World Cup.

A product of the world-renowned Real Madrid academy, Lopetegui first spotted the midfielder while leading Spain’s Under-19s group back in 2011, when he named Sarabia as his captain for Spain’s winning Under-19 European Championship campaign.

On Madrid books at the time of that tournament, but it’s at CF Getafe where the midfielder learned his trade in the professional game, turning out almost 150 times for the LaLiga outfit, before stepping up the Spanish pyramid with Sevilla in 2016.

That’s where Sarabia truly flourished. In his three seasons with the club, he hit double figures, with his final campaign bringing 23 goals and 17 assists, earning him a place in the LaLiga Team of the Year, which led to recognition by the Spanish senior team for the first time.

For Spain, the 30-year-old has earned 26 caps, appearing at Euro 2020 alongside Wolves’ Adama Traore, bagging against both Slovakia and Croatia as Spain reached the semifinals, as well as the FIFA World Cup in Qatar just last month.

It was also those eye-catching stats at Sevilla FC which paved the way for a move to PSG in 2019, just one month after Lopetegui’s arrival at the Spanish club, and in the French capital he became a UEFA Champions League goalscorer, netting against former club Real Madrid at the Bernabeu.

Eight honours came in Paris, as well as a role in PSG’s route to the UEFA Champions League final in 2020, appearing in the quarter and semi-finals, before being named on the bench as Thomas Tuchel’s side were beaten by Bayern Munich.

With opportunities limited at PSG, Sarabia spent last season on loan at Sporting CP and hit his Sevilla heights, registering 22 goals and 11 assists in Portugal, with one of each coming in the Taca da Liga, which saw Sporting lift the cup last January.

Back in France this season, the midfielder has turned out 18 times for PSG, most recently against Lens on New Year’s Day and now, 12 years after working with Spain’s under-19s together, Sarabia and Lopetegui are reunited at Molineux.