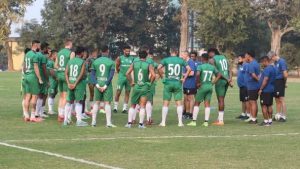 “We have to keep doing what we’re doing, push hard and win every game, especially at home.”, stated Jamshedpur FC’s Gaffer Aidy Boothroyd in the pre-match press conference ahead of their next fixture in the 2022-23 ISL.

The Men of Steel face Bengaluru FC for their upcoming game at the JRD Tata Sports Complex. This fixture will be the 15th game of the league stage for both sides.

Jamshedpur FC put up a solid winning performance against Kolkata-based side East Bengal FC in their previous outing. An away clash at the Saltlake Stadium saw the hosts taking an early lead in the first half and ended the first period in their favour. The Men of Steel stepped up their game after the break as they were quick to respond with a goal for themselves. A debut goal from Jamshedpur’s striker, Harry Sawyer brought his side back into the mix as he made instant impact coming off the bench. After 30 minutes of intense action between the two, the in-form winger, Ritwik Das netted in a stunning header in the final minutes of the game to snatch all the points for his side

Previously, the two teams have shared the pitch 11 times in which both teams have equal number of wins (four wins). A Bengaluru FC win in their previous meeting saw the Blues making the winning record level. Furthermore, 3 of their previous clashes have ended in a stalemate.

The last time the two sides faced each other exactly a month ago, Jamshedpur FC travelled to Bengaluru for an away game but were unsuccessful in retrieving any points away from home. An early goal by the Blues was well defended till the full-time whistle by the host side which won them all the 3 points.

Currently, Bengaluru FC are in eighth spot on the table with 16 points and five wins on the board. On the other hand, Jamshedpur FC are sitting on the 10th position with nine points.

Jamshedpur FC, on the back of an impressive performance against the Torch Bearers, will be seeking to ride the winning momentum and produce another victory to make it two in a row. However, the Bengaluru FC side has also managed to be the victorious team in their two consecutive fixtures and will be on the hunt to continue their winning streak by making it three wins in three continuous games. With both squads hungry to gather as many points as possible in the final five games of the league stage and try to fix their spot among the top 6, the clash between the two will be no short of intense footballing action at the Furnace.