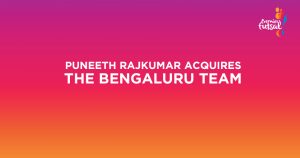 Premier Futsal is a private and semi-professional Futsal league promoted by Xavier Britto of Indev Group. The league will be hosted from July 15 to 26, 2016 to create awareness of Futsal as a sport in India. Premier Futsal will make India the first country in the world to host a multi-national All-Star Futsal tournament that brings the legends of football and futsal together.

The agreement, for an undisclosed sum, makes Bengaluru the third franchise to be sold after the youngest son of Rajkumar, Kannada cinema’s most decorated actor picked up the Bengaluru 5’s franchise.

The multi-talented Kannada actor Puneeth Rajkumar said, “Bengaluru is consuming new sports with much curiosity. A fast paced sport like Futsal is certain to catch the imagination of the youth in Bengaluru. It is an honour to be a part of something that is happening for the first time in our country and I am certain the people from Bengaluru will come forth and support our venture to lead the Bengaluru franchise of Premier Futsal.”

The Bengaluru franchise will be known as “Bengaluru 5s”, similar to how the all the teams will be named in the inaugural season. The franchise owners will then be allowed to rebrand their respective teams from the second season onward.

Premier Futsal Managing Director, Dinesh Raj said, “We are delighted to announce one of Kannada cinema’s most decorated families picking up our Bengaluru franchise. It is a great opportunity for us to introduce a new sport to Karnataka. The response we have received from prospective owners across all cities validates our decision to get behind Futsal as sport. We will unveil owners of the other franchises tomorrow, July 12.”

The league has signed some of the best futsallers in the world – spearheaded by the renowned Alessandro Rosa Vieira, fondly known as ‘Falcao’ – and has even enticed iconic footballers like Paul Scholes, Michel Salgado and Deco to compete.

Each franchise will be assigned a marquee international football player, seven international and five Indian Futsallers for their squad to participate in the inaugural season through a player draft scheduled later this month.

Premier Futsal will be telecast live and exclusive on Sony SIX, SONY ESPN and Sony AATH. Matches will also be available to live stream on Sony LIV.