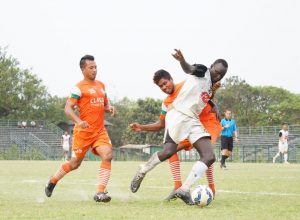 Mohammedan Sporting Club recorded a comfortable 2-0 win over NEROCA FC in their final round clash of the Second Division League in Kolkata on Friday.

Going into the game, Mohammedan Sporting coach Subrata Bhattacharya (Jr.) was forced to make a couple of changes to the side that beat Gangtok Himalayan SC last week as Lancine Toure and Nagen Tamang were suspended which saw Bikramjit Singh and Sheikh Faiaz took their role in the starting line-up.

Playing their last home game of the season, Mohammedan Sporting began the game confidently with an attacking mindset. It only took Mohammedan Sporting three minutes to break the deadlock when Moga headed home off a rebound of Ajay’s shot to put the hosts ahead. The early lead gave Mohammedan Sporting a boost in confidence and they attacked the NEROCA goal ferociously going close on a few occasions.

After dominating proceedings, Mohammedan Sporting doubled their lead midway through the half as the South Sudan international turned provider this time for Ajay who converted a delightful pass of Moga from the left side. Thereafter, Mohammedan Sporting continued to put pressure on the NEROCA defense holding midfield superiority. A few good chances fell for Faiaz and Imran Khan but they lacked the finishing touch in the final third as the scoreline remain 2-0 in favour of the hosts at the interval.

Changing over, the visitors NEROCA tried their best in reducing the margin and came with few counter moves. Gift Raikhan’s side had two clear chances but substitutes Chinedu Emmanuel and Ronald Singh failed to score.

Meanwhile, Mohammedan Sporting almost added the third in the 72nd minute but Faiaz literally failed to put the ball into the empty net after being set up by Ajay. In the remainder of the half, Mohammedan Sporting held on to their lead to ensure back-to-back wins in the competition which took their tally to 7 points from 5 games.

Mohammedan Sporting will travel to Chandigarh next where they face Minerva Academy FC on May 5.

@Arunfoot
Previous Tata Football Academy to hold selection trials on Tuesday, May 3 in Ranchi!
Next Goa U18 League: Salgaocar Juniors win 3-0 over Pax of Nagoa!