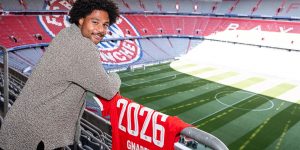 FC Bayern Munich have extended German international Serge Gnabry’s contract until summer 2026. Since joining the club from Werder Bremen in 2017, the 27-year-old attacker has celebrated four Bundesliga titles, two DFB Cup successes and was a key player in the historic sextuple year, which included winning the UEFA Champions League.

Herbert Hainer, FC Bayern president, said, “It’s another strong signal that a player like Serge Gnabry sees his future at FC Bayern. He’s won everything here and identifies with the club so much that he wants to help write more chapters of club history. When he’s on the ball, he’s a joy to watch. With him, Sadio Mané, Thomas Müller, Kingsley Coman, Leroy Sané and Jamal Musiala, FC Bayern have outstanding options on the flanks which are among the best in European football.”

Oliver Kahn, FC Bayern CEO, said, “With his spectacular style of play, Serge Gnabry is a player who fans come to watch. We’re glad that he’s extended his contact and look forward to him continuing to be an important part of our team. Serge came to Munich at the age of 22 and has grown into a Champions League winner and international here. We need top international players like him to achieve our big objectives.”

Hasan Salihamidzic, FC Bayern board member for sport, said, “We’re happy that Serge Gnabry has extended his contract at FC Bayern until 2026. Serge has become a face of FC Bayern, he’s a German international, a goal threat – and he still has potential that he wants to fulfil. As our good and trustful talks with him and his advisers demonstrated, Serge identifies with our path and with FC Bayern. He’s part of the core of our team, he’s given the club a lot so far and will continue to be an important player for us.”

Germany international Serge Gnabry said, “I thought a lot about what I want as a player in the coming years, and came to the conclusion that I want to stay at FC Bayern, win everything again here and experience things – in particular celebrating another Champions League title, but this time with our fans. It’s special because I get to play here with my friends at the highest level. It certainly wouldn’t feel the same at a different club. I want to experience more great moments here – and nowhere else. The hunger for major honours isn’t going away.”