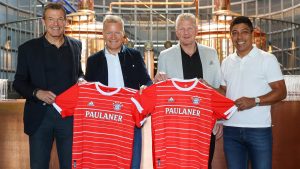 The partnership between the FC Bayern Legends team and Paulaner is being extended once again. In future, the Munich brewery’s logo will adorn the chest of the team led by Giovane Élber. The team is also getting a top-quality newcomer in Stefan Effenberg. Some 20 years after leaving the Reds, the former captain is returning to the club with which he won three Bundesliga titles, a DFB Cup and the Club World Cup, as well as his crowning achievement, the Champions League in 2001.

FC Bayern board member for marketing Andreas Jung, said, “We are delighted to extend the partnership between the FC Bayern Legends and Paulaner. With it, we are once again underpinning the unique path of our Legends. We are also very happy to welcome Stefan Effenberg to our team as a new Ambassador. As a leader on the pitch, he led our club to historic successes, which earned him a special place within our fans’ hearts and makes him an ideal representative of FC Bayern.”

Andreas Steinfatt, managing director, Paulaner Brauerei, said, “Paulaner and FC Bayern are Munich originals that have been celebrating goals, titles and triumphs together and inspiring fans for many years. As ambassadors of the Bavarian way of life, we convey shared values to the whole world. Seeing the Paulaner logo now on the chest of the FCB Legends is a proud expression of this lived partnership. We are very much looking forward to working even more intensively with the famous FC Bayern Legends in the coming years in implementing campaigns for football lovers, first and foremost with the Paulaner Fanträume . A first highlight will be the Legends match between Bayern and the Sechzgern on 23 October at the Olympiastadion.”

Stefan Effenberg, said, “It’s a great feeling to return to FC Bayern as an Ambassador. FC Bayern is always described as a family – and that’s exactly how it feels, even today. Those who know me know I don’t do things by halves. As captain, I used to give everything on the pitch for this club and its fans all over the world, and now I’ll also fulfil this new role as Ambassador with my passion for FC Bayern.”

Paulaner has been a partner of the FC Bayern Legends since 2021. Together, the two Munich originals stand for tradition and the future, a homeland and cosmopolitanism, success, emotions, a zest for life and their home city of Munich. The FC Bayern Legends are the first and only team in global football to have secured their own main partner and jersey sponsor. This underlines the continuous development and special significance of the team.

The FC Bayern Legends will wear the new Paulaner jersey on the occasion of Claudio Pizarro’s testimonial on 24 September in Bremen’s Weserstadion. The following day, they will pay their traditional visit to the Oktoberfest in the Paulaner marquee. The highlight this autumn will be the match against 1860 Munich at the Olympiastadion to mark the anniversary of “50 years of the Olympiapark” on October 23.

Tottenham Hotspur have announced a new multi-year official partnership with Coca-Cola. Through the partnership, Coca-Cola’s …