The Aftermath – A step in the right direction for Jamshedpur FC!

Press Release 2023-01-09 Indian Super League Comments Off on The Aftermath – A step in the right direction for Jamshedpur FC! 788 Views 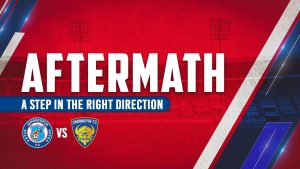 Jamshedpur FC may feel disappointed not to leave the Furnace with all three points after a gutsy and impressive display against Chennaiyin FC on Saturday, but there are some clear positives to take from the performance.

Back to back games are never easy, and the Men of Steel were already on the back foot heading into this game, with a grueling travel schedule forcing a number of top players to start on the bench instead of on the pitch.

That being said, this opened up the opportunity for other players to shine, and that they certainly did. Ritwik Das showed glimpses of his return to last season’s form with a decent cameo against Kerala Blasters last time out, and having earned a starting eleven spot, the 26-year-old more than repaid the faith the head coach, Aidy Boothroyd, put in him.

Ritwik was a breath of fresh air in what has been a tough season so far for the reigning League Shield winners of the Indian Super League, dancing his way past defenders and showing tremendous composure under pressure.

His goals came after head coach Boothroyd has repeatedly lamented the missed chances throughout the ISL campaign, which could have surely added a few more points to the board and helped the team push forward.

Ritwik’s performance was not the only highlight for the Jamshedpur team in this game. Vishal Yadav has been sensational since making his debut for the club in early December against ATK Mohun Bagan, and made some top saves in Saturday’s game as well, ensuring that Chennaiyin FC were kept at a distance for the most part.

Vishal’s progress in a very short period of time has been nothing short of phenomenal, keeping established number one TP Rehenesh on the bench. The Tata Football Academy (TFA) graduate continues to impress, and is one to keep an eye on for the future of Indian football.

Finally, the midfield at Jamshedpur FC looks like it’s finally coming together. The signings of Rafael Crivellaro and Pronay Halder have added something extra to the centre of the pitch, and it was very clearly visible against the Marina Machans.

Aidy Boothroyd referred to Halder’s performance as one that brought “steel” to the midfield, and it is clear that the best is yet to come from the Indian International. Halder has been in the Jamshedpur setup before, and understands the team better than most, giving him an added advantage as a new signing.

Crivellaro, on the other hand, is using his increased playing time in the best way possible. The Brazilian has been solid if not spectacular in the last couple of games, playing more and more after an injury ravaged recent past, and has added the “oomph” factor to Jamshedpur FC from attacking midfield.

On Saturday too, the midfielder showed his class, gliding past defenders and making a real impact in the game, with the only thing missing being a goal for his efforts.

The Crivellaro masterclass is only expected to get better in the next few games, and while the positives are visible in the last few matches, there is a need for Jamshedpur to turn the maybes into victories and push up the table.