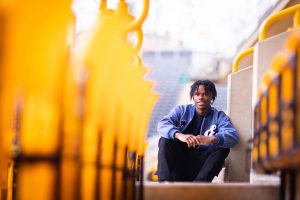 Dexter Lembikisa has agreed a new three-and-a-half-year contract at Wolverhampton Wanderers after the academy graduate has impressed Julen Lopetegui and his first-team staff.

The full-back joined Wolves – who hold an option to extend the contract for an extra year – as a 13-year-old and has been integrated into the senior group this season having shown his talent in the past 18 months.

Lembikisa’s work ethic and attitude of embracing every challenge in his path has seen him progress through the ranks of the academy to become a Premier League player in gold and black.

But his development has blossomed in recent years, seeing the 19-year-old quickly progress from the Under-18s to the U-21s before his first senior opportunity came under his former academy coach Steve Davis.

Davis rewarded Lembikisa with his first appearance for Wolves in the Carabao Cup victory over Leeds United before his Premier League bow arrived just three days later at Molineux against Arsenal FC.

The right-back has maintained his position in the squad under Lopetegui, with the Spaniard handing Lembikisa his first senior start in gold and black in the FA Cup third round tie against Liverpool FC on Saturday evening.

Sporting director Matt Hobbs feels Lembikisa is an excellent role model to the young players coming through Wolves Academy today and proof of how working hard can get you far in football.

“It’s great for Dexter and his family,” Hobbs said. “I’m delighted for him and delighted for what it shows the rest of the academy players.”

“Dexter is a real role model as a player and person the rest of the boys coming through can look up to. He’s shown that even if you’re not one of the superstars within your age group, that doesn’t matter. If you come in every day with the right work ethic and the right attitude then this is what’s possible.”

“Your journey doesn’t have to be linear and it can just be down to working to be the best version of yourself you can be. Sometimes that’s good enough, and sometimes it’s not, but what Dexter’s attitude and work ethic gives him is the opportunity to be the best player he can be, and as we’ve seen so far, that’s going to be a real asset for the football club going forward.”

“This contract shows the faith we have in him, but it’s also a reward. Contracts are not something that we give away. We’re a football club who like to bring players through and guys have done a great job in developing the academy over the last few years, so it’s another testament to their work.”

With Lembikisa’s long-term future secured at Molineux, Hobbs believes the defender will continue to develop under Lopetegui, as well as outlining possible loan plans.

“He’s worked hard under the new manager, and Julen really likes him. He’s been impressed by his athleticism and by his one-on-one defending, which is excellent. He’s quickly become part of the first-team group and didn’t look out of place on his Premier League debut against Arsenal.”

“We’ve got long-term plans for him and he now has a real opportunity. He is part of the first-team group but due to the type of player he is he could stay, learn and develop under the coaching team or has all the attributes to go and have a successful loan for the remainder of the season. Let’s see how the window plays out.”

“If we decide not to send him out on loan, it will be because we believe training with this group every day will continue his development. For a lot of our players, we have a distinct plan of what we want we want from them, but with Dexter, we feel we can have different approaches depending on what we think suits him and his development best. Julen will obviously play a key role in this decision.”

Previous The Aftermath – A step in the right direction for Jamshedpur FC!
Next Mizoram Football Association ExCo holds first meeting of 2023!