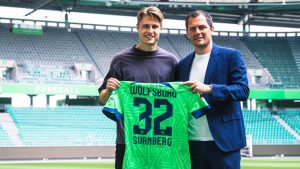 Two days after the signing of young striker Dzenan Pejcinovic, VfL Wolfsburg have announced another transfer. Midfielder Mattias Svanberg joins from Italian club Bologna FC on a five-year contract until 2027.

The 23-year-old Swede, who will wear the number 32 shirt for Niko Kovac’s side, made 118 appearances in Serie A, in which he registered nine goals and eight assists. The Malmo native has also featured 21 times for the Swedish national team, scoring one goal.

“Despite being only 23 years old, Mattias is already hugely experienced and very far along in his development,” said VfL Wolfsburg sporting director Marcel Schäfer. “He’s a very willing runner and technically strong midfielder. We’re delighted that we’ve managed to bring a player of his calibre and potential to Wolfsburg.”

The new Wolf is also excited about the next step in his career, “In the talks with the management, I immediately sensed how much they wanted to have me at VfL Wolfsburg. That was very important to me. I have the best conditions here to develop as a player, and I believe I can help the team to be successful. I’ll give everything to ensure we win matches, so that we can perform as well as possible in the Bundesliga and also play in Europe again.”

Svanberg is the Green-and-Whites’ sixth signing of the summer. Before him and Pejinovic, Jakub Kaminski, Patrick Wimmer, Kilian Fischer and Bartol Franjic also completed moves.