Vietnam to good for India in 3-0 win! 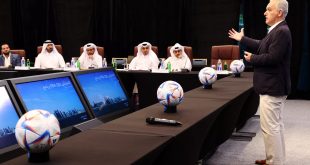 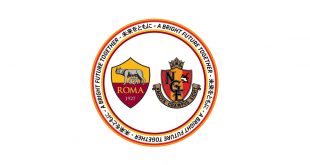 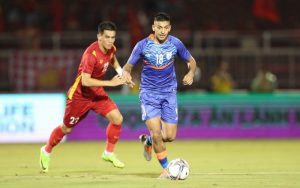 India suffered a 0-3 defeat at the hands of hosts Vietnam in their second and final match of the Hung Thinh Friendly Football Tournament at the Thing Nhat Stadium in Ho chi Minh City, on Tuesday, September 27, 2022.

The opening exchanges saw India get off on the front foot, winning the first corner of the game, one that Sunil Chhetri swung in for Anirudh Thapa, who was lurking inside the six-yard-box, but the ball evaded the latter.

At the other end, Nguyen Cong Phuong of Vietnam was played into the Indian box on the left, and was looking to put in a dangerous cut-back, but Blue Tigers centre-back Sandesh Jhingan was on hand to avert the danger.

The hosts did not take too long to jump into the lead when a clearance from a Vietnam corner fell kindly for Phan Van Duc, who did well to volley it home with his back turned towards the goal, giving his side the lead on the 10th minute.

Despite the lead, Vietnam did not sit back, looking to score their second of the night, but that also created gaps at the back. Akash Mishra and Ashique Kuruniyan combined on the left to create a wonderful opportunity for India in the 26th minute. Mishra soared up the left and fed it through to Ashique in the box. The latter took a touch and sent in a left-footed volley which went wide.

Minutes later, Ho Tan Tai whipped in a dangerous cross from the right towards Nguyen Tien Linh, but Chinglensana Konsham did well to get his body in the way and clear the danger.

Sahal Abdul Samad had a great opportunity around the half hour mark when Udanta played it to him inside the box, as he stepped past his marker and tried to cross it, but the ball went straight to Vietnam keeper Tran Nguyen Manh.

Blue Tigers head coach Igor Stimac was forced into an early substitution when Sahal hobbled off with an injury, and was replaced by Rahul KP.

India had their best chance of the first half with just about a minute of regulation time left on the clock, when an Akash Mishra cross from the left found an unmarked Sunil Chhetri inside the six-yard box. The India captain attempted to flick his header in off the far post, but missed by a mere whisker, as the referee soon blew his whistle signalling the lemon break.

Vietnam made a couple of changes at the start of the second half, and it was second half substitute Nguyen Van Toan, who doubled their lead four minutes into the second half. Giving chase after an aerial ball, Van Toan barged past Indian centre-back Anwar Ali, entered the box, and slipped it into the bottom corner.

Chances were few and far between for India against the confident hosts at the start of the second half, but a determined Udanta Singh, giving chase after the lost causes, nicked the ball on the left flank, squared it to Ashique, who crossed it in for Chhetri, but the ball was cut out.

Stimac soon introduced some fresh legs into the fray, looking to change India’s fortunes, as Brandon Fernandes, Liston Colaco, and Roshan Singh were brought on for Chhetri, Udanta and Chinglensana, with around 25 minutes of regulation time to go.

While these substitutions did allow India to gain a bit more control of possession in the middle of the park, that also left spaces behind, which is exactly what Vietnam exploited in their third goal of the night. Bui Hoang Viet Ahn’s cross from the right was headed clear by Jhingan, but Nguyen Van Quyet got on the stray ball and smashed it home.

Gurpreet produced a couple of reflex saves to keep the score at 0-3, before India produced their best chance of the second half. Liston Colaco darted up the pitch on a counter attack, entered the box, and squared it towards an onrushing Rahul KP, who only had to turn it into an empty net, but could not reach the ball in time.

India threw bodies forward in the closing stages, and a cross by substitute Brandon Fernandes directed towards Sandesh Jhingan inside the Vietnam box created some excitement, but the latter’s header was straight at the keeper.

With this result, India finish the Hung Thinh Friendly Football Tournament with one point, on the second spot, ahead of Singapore on goal difference.

#Vietnam show why they are currently better than #India. https://t.co/hn8sy3VEYv