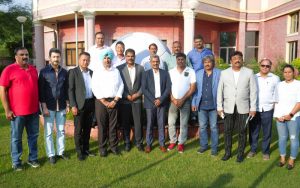 The AIFF Competitions Committee, chaired by Anilkumar Prabhakar of Kerala, on Tuesday, September 27, 2022, met at the Football House in New Delhi to discuss the way forward for various domestic competitions in the country.

Chairman Mr. Anilkumar said, “It is our intention that the National Football Champions will act as a feeder for the football in our country and help in broad basing the pool of players. With such a system in place, we are confident that Indian Football will benefit in the long run.”

The Santosh Trophy was at the top of the Committee’s priority list, and it recommended that the legacy competition will now be played on a zonal basis. The Final Round of the competition will have a total of 12 teams (10 qualifying states, along with the Services and the Railways). In the Zonal stage, the states will be divided into seven groups of five to six teams each. The seven group toppers and two best second-placed teams, along with the hosts will qualify for the Final Rounds. The Group Stage will get underway in December.

The Committee further suggested that the Santosh Trophy format be followed in all other National Football Championships at all age group level. The committee members pointed out that it will help footballers to get more game time and improve their skills. The Senior Women’s National Football Championship Qualifiers will also be held in December, the Committee decided.

The committee stressed on the fact that the facilities for the players, especially in terms of travel and stay, should be improved with immediate effect.

The Committee also felt the Super Cup will be played at the venues selected by the AIFF in a broad based manner. The competition will consist of the Qualifying Rounds, the pre-quarterfinals, the quarterfinals, semifinals and the final.

The committee recommended that all National Youth Championships should be held between December and May.

Previous FC Goa welcomes Parimatch News as Main Principal Sponsor for ISL 2022-23!
Next Vietnam to good for India in 3-0 win!