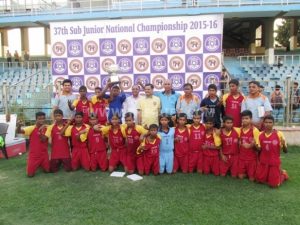 West Bengal were crowned Champions of the 37th Sub-Junior National Football Championship as they defeated Odisha 1-0 in the finals of the Championship at the Ambedkar Stadium in the Capital on April 23, 2016.

Kartick Golder’s 88th minute strike proved to be the difference between the two sides, in a cagey match, which saw both Teams showcase some glitzy attacking Football.

West Bengal started the game on an attacking note, catching Odisha off-guard, and in the 1st minute itself Kartick Golder breezed past two defenders only to shoot way over the bar.

Shaking-off a complacent start, Odisha came back into the game as they started dominating possession and controlling the tempo of the game. In the 18th minute, Odisha fostered a golden opportunity to take the lead as a low cross from the left flank found Samir Kerketta in the penalty box. Kerketta, instead of bundling the ball home, failed to tap-in from handshaking distance.

The match became cagey as both Teams tried to take the game by the scruff of its neck, but neither succeeded. Odisha came close once again in the 34th minute when Bekey Oram’s outside of the boot free-kick from the edge of the penalty box rattled the cross bar.

With neither Team able to convert their fostered chances, the half-time scoreline read 0-0.

Changing over and Odisha created a goal scoring opportunity when a cross from the right flank found Samir Kerketta’s head. Kerketta’s header lacked the necessary venom as the West Bengal custodian made an easy save.

The match turned into an end-to-end affair and in the 58th minute, Bekey Oram’s shot from distance earned a finger touch save from the West Bengal custodian. Two minutes later, Hassan Ali Molla went on a solo run and with only the Odisha custodian to beat, Molla miscued his shot and struck the crossbar.

In the dying embers of the match, West Bengal took the lead when Kartick Golder scored a screamer as his shot from 25 yards out curled into the back of the Odisha net, leaving the Odisha custodian wrong-footed as the scoreline read 1-0.

The West Bengal defence thwarted away Odisha attacks and stood strong as the full-time scoreline read 1-0 in West Bengal’s favour.

Football has certainly evolved over the years. The game itself has even branched off into …