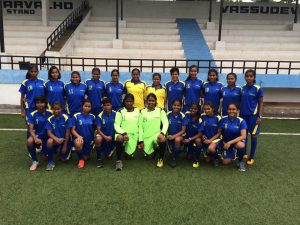 In the match that was played at Cuttack’s Barabati Stadium at 7am this morning, the Goan girls attacked the rival half from the word go. Coach Juliet Miranda fielded a 4-4-2 combination with strikers Karishma Shirvoikar and Sushmita Jadhav combining well with wingers Annika Coelho and Anline Fernandes. The midfield was marshalled by junior internationals Avia Jean Vas and Velanie Fernandes. The back four comprised of captain Cianna Lobo, Scindia Saundatikar, Vailanka D’Souza and Cynthia Lobo. Goalkeeper Rhea Noronha was her usual reliable self in the goal.

The Goans started off with a flurry of attacks which were neutralised by some solid defending from the Bengal defence line. However, Goa’s relentless pressure yielded fruit in the 32nd minute when Karishma latched on to a pass from Anline and slotted it home. The Goan girls further consolidated their lead in the 40th minute when a cross from the right by Anline was met by Sushmita, whose rasping drive was blocked by a rival defender. Karishma, lurking in the area, was quick to capitalize on the rebound and headed it home.

After the lemon break, West Bengal regrouped and had a better share of ball possession. The Goans were content to play the counter attacking game. West Bengal managed to pull one off in the later stages of the game, but the Goans sealed their victory in the 83rd minute when Velanie managed to send a through pass to Karishma, who coolly found the back of the net to finish her hattrick, and give the Goans a resounding victory in the opening tie.

Coach Juliet Miranda replaced Annika with Geneive Fernandes and Avia with Marlat Cardozo. The match ended 3 – 1 in favour of the Goans.

The Goans play their next match against Kerala at 3.30pm on July 5. Goa is grouped with Kerala and West Bengal. The winner of the group qualifies to the quarterfinal league.